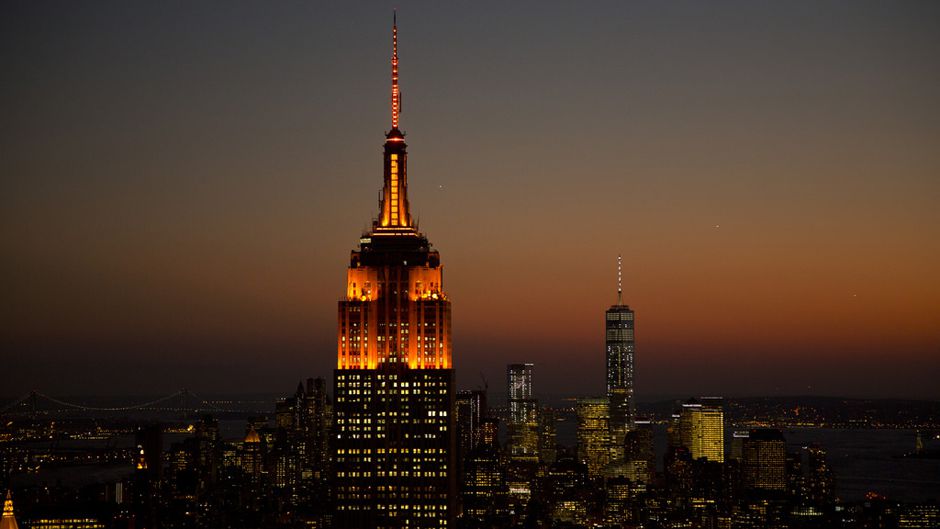 Tonight, for the first time ever, both the iconic Empire State Building and United Nations Headquarters in New York will be bathed in orange light to kick off the “Orange YOUR Neighbourhood” campaign ahead of the International Day to End Violence Against Women.

“Together, we must end this global disgrace,” Secretary-General Ban Ki-moon said at a special pre-lighting ceremony at the Empire State Building this morning where he “flipped the switch” ahead of the Building’s illumination tonight.

“It is up to everyone to play their part; women’s rights are not only women’s business. Men and boys are finally taking their place as partners in this battle,” Mr. Ban explained in midtown New York where he was joined by American actress Teri Hatcher, Mrs. Yoo Soon-taek, and Phumzile Mlambo-Ngcuka, Executive Director of the UN Entity for Gender Equality and the Empowerment of Women (UN Women). 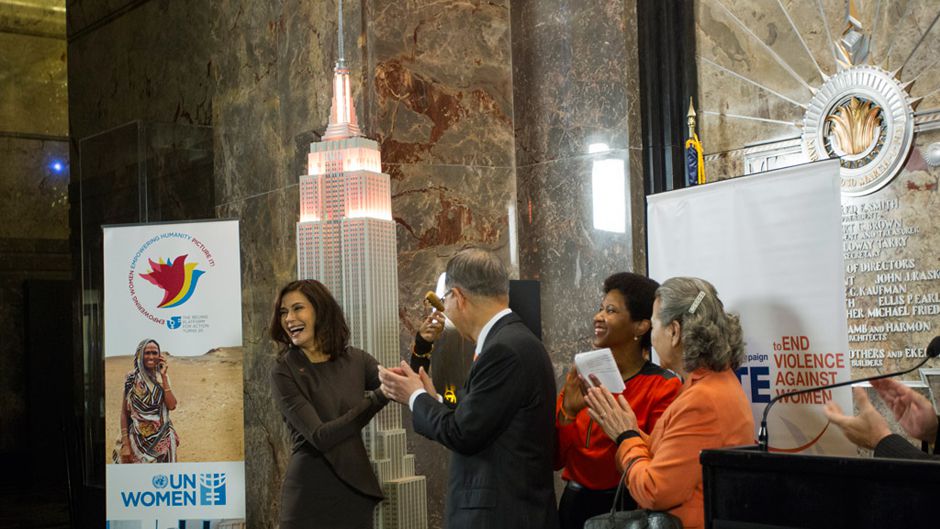 American actress Teri Hatcher (left) flips the switch to illuminate the Empire State Building for the UNiTE to End Violence Against Women campaign. Secretary-General Ban Ki-moon (third from right), his wife Yoo Soon-taek (far right), and Phumzile Mlambo-Ngcuka (second from right), Executive Director of the UN Entity for Gender Equality and the Empowerment of Women (UN Women), are at her side. Photo: © UN Photo/Rick Bajornas.

Orange YOUR Neighbourhood is part of Mr. Ban’s campaign UNiTE to End Violence against Women. The theme will carry through related events during the 16 Days of Activism against Gender-Based Violence, which run between 25 November and 10 December (Human Rights Day).

The hashtags #OrangeUrhood and #16days are being used to raise awareness on social media.

Despite recent progress, violence continues to plague one billion women worldwide. That means that one in three women experiences physical or sexual violence at some point in her life — mostly by an intimate partner.

According to UN-Women, among all women killed in 2012, nearly half died at the hands of a partner or family member. And far too often, crimes go unpunished and perpetrators walk free.

This year alone, more than 200 girls have been kidnapped in Nigeria, and we have seen graphic testimony from Iraqi women of rape and sexual slavery during the conflict there, Mr. Ban said.

And here in the United States, there have been high-profile cases of sexual violence involving sports teams and on university campuses. But we know that many other cases go unreported and unpunished, he added.

“This is outrageous, and it must stop,” the Secretary-General declared, calling for an end to the “mindsets and traditions that encourage, ignore or tolerate violence.”

The campaign to end violence against women calls on everyone around the world to display the colour orange to symbolize their commitment and hope for a safe future for all women. People will tie orange ribbons on landmarks. Marchers dressed in orange will raise awareness and discuss community-wide solutions.

“We need this eye-catching colour everywhere so that the message is loud and clear: we all need to work together to stop violence against women and girls right now,” said Ms. Mlambo-Ngcuka in an earlier press release.

In New York’s Times Square, one of the world’s most fabled crossroads, the NASDAQ and Reuters Tower screens will flash the colour along with anti-violence messages in hopes of reaching a wide audience. The United Nations Secretariat will be lit up orange this evening at 7pm. 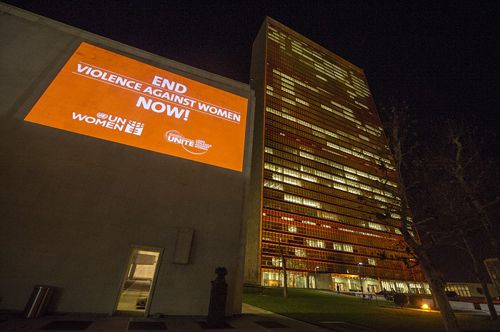 “That includes men and boys standing up for what’s right and working with us and the women’s movement to tackle gender inequality. We have to end this universal violation of human rights,” Ms. Mlambo-Ngcuka added.

Several events have been organized around the world in solidarity. In Latin American, a marathon in Mexico City; in Africa, a film forum hosted in Uganda screening stories focusing on the experiences of women’s lives; in Asia-Pacific, public spaces in India will turn orange to promote awareness among local communities.

Meanwhile, in the Middle East, activities are planned, many with a focus on violence against women in Gaza. High-profile events in Eastern Europe and Central Asia include a series of awareness-raising forums on the violence that young girls face in high schools.

Media outlets and their journalists are also getting involved by either wearing orange or using it in their studios and urging audiences to do their part to end violence against women and girls.

The private sector has played a catalytic role this year. For example, United Colors of Benetton is launching a campaign which will contribute to increasing awareness.

“We know what works; now we are insisting on the commitment of political action and commensurate resources to that agenda,” Ms. Mlambo-Ngcuka said.

The good news is that momentum is growing as the world gears up in 2015 to mark the 20th anniversary of the Beijing Platform for Action, as well as the end of the Millennium Development Goals (MDGs) and the framing of a bold new global development agenda.

“Together we must make 2015 the year that marks the beginning of the end of gender inequality,” Ms. Mlambo-Ngcuka added. “Now is the time for action.”

Several events planned at Headquarters tomorrow to mark the official Day will be attended by the First Lady of New York City, Chirlane McCray and actress Teri Hatcher.