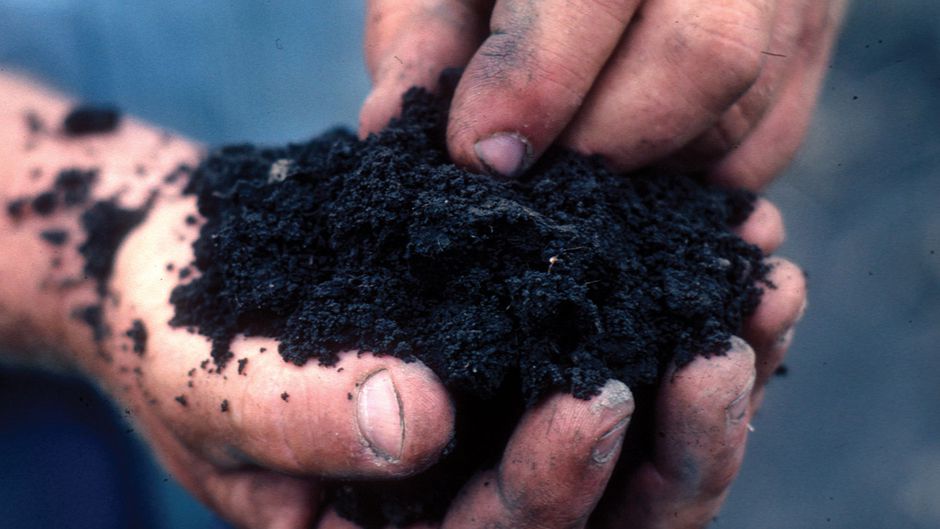 The middle of the world’s largest ocean seems a strange place to learn about soil. But the histories of tiny island communities dotted across the Pacific Ocean actually provide perfect examples of how soil management practices can sustain or doom a society. Resource limitations are swiftly apparent on remote islands with tight boundaries, but just zoom out a few thousand times and the whole world with its seven billion people becomes one little island in a sea of emptiness.

So let’s start in Mangaia and Tikopia, two little dots in the South Pacific. Mangaia is the southernmost of the Cook Islands, while Tikopia is the southernmost of the Solomon Islands. Both were covered with thick forests and uninhabited until small groups of Polynesians arrived some 2,500–3,000 years ago. Even without the benefit of written histories, major changes in the ecology of both islands can be pieced together using sediment records and bone deposits. Microscopic charcoal and pollen residue point to clearing of forests and more extensive cultivation as populations expanded on both islands.

It is here that the paths of the island communities diverge. On Mangaia, taro cultivation on volcanic slopes gradually led to a loss of topsoil and the shrinking fertile areas, primarily in the lowlands, became the focus of intense taro cultivation as well as continual eruptions of violence over the diminishing resource base. Analysis of bone fragments points to over half of native bird species being wiped out, along with the fruit bats, pigs, chickens and dogs. At its zenith, over 5,000 people likely lived on Mangaia, but by the time Captain Cook rediscovered the island in 1777, fewer than 1,000 remained.

On Tikopia, a specially adapted form of agroforestry was developed that sustained soil fertility and crop yields. Across the island, coconut and breadfruit trees rose up in a natural canopy above taro and yam crops. Local legend has it that pigs were even eliminated from the island, because they were seen to be causing too much damage to the plant crops. These agroforestry practices are highly sophisticated and remain largely in place today following a 1,000+ year history of relative stability. This was coupled, however, with a zero population growth ideology that was enforced with a bitter range of population control measures including forced abortion and infanticide.

These are just two of the examples introduced by MacArthur “Genius Grant” recipient David R. Montgomery in his book dirt: The Erosion of Civilizations. His decision not to capitalize the first word of the book’s title is perhaps a not-so-subtle indictment of soil’s seemingly unappreciated status as the root of all things. It’s also an excellent primer as we head into 2015, which has been designated as the United Nations International Year of Soils.

Perhaps one of the most charming parts of the book comes right at the beginning, with an aged Charles Darwin sitting in his home surrounded by jars of earthworms. As a younger man walking on his property in the English countryside, he had noticed some loose stones in one area that clattered underfoot. Many years later, he noticed that the stones no longer clattered, but were now firmly embedded in soil. Fascinated by this seeming mystery, in his final years, he enlisted his adult sons to help him collect hundreds of earthworms and systematically weigh them as well as their frass (excrement). The findings eventually convinced him of the crucial role of earthworms in soil formation and provided the material for the final book of his life.

“There is nothing new except what has been forgotten.” – Marie Antoinette

At the core of Montgomery’s book, however, is a simple point: in any given setting, there are relatively predictable rates of soil formation and soil erosion. Over geologic time, soils built up around the world wherever formation rates exceeded erosion rates. Mayan ruins abandoned some 1,000 years ago, for example, now are covered in around three inches of soil, corresponding to 300+ years being needed to form one inch of new soil. But why were these cities in ruins in the first place? One factor, Montgomery points out, is that cultivation activities had caused erosion rates on slopes in the area to outpace soil formation rates by 100 to 1. Indeed, soil samples have shown that Mayan-era trenches had been buried in up to six feet of soil eroded off of surrounding slopes, which had been rendered largely barren. 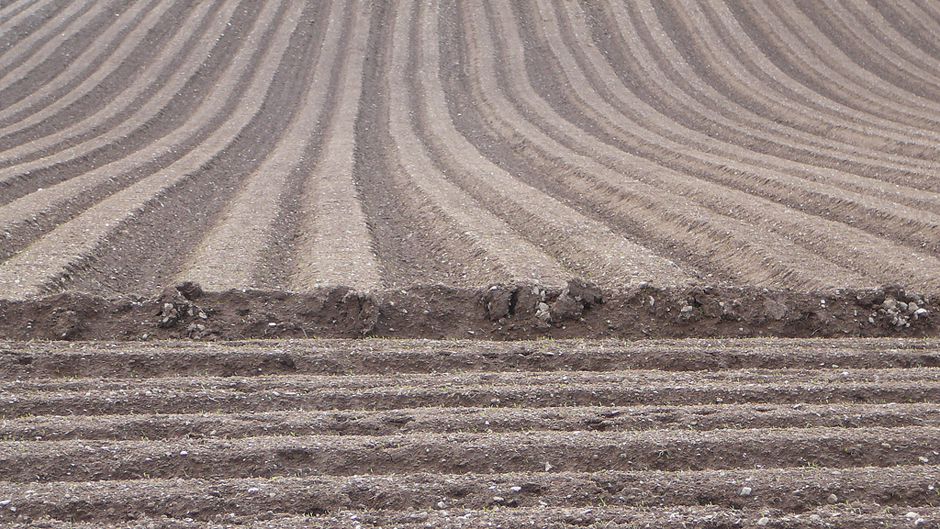 Since 1945, some 1.2 billion hectares of agricultural land have been moderately or extremely degraded (that roughly corresponds to the size of China and India combined). On average, globally, human influence has caused a tenfold increase in rates of erosion over estimated long-term geologic rates. Photo: Tim Green. Creative Commons BY (cropped).

The book has a dramatic overarching theme, namely to demonstrate the role that soil management practices play in the rise and fall of civilizations. Montgomery dedicates considerable effort to documenting the gradual erosion of soils in the Roman Empire, leading to increasing dependence on imported grain from North Africa. A lost shipment from the fertile fields along the Nile would translate into months of hunger or even starvation in Rome.

At the same time, many of the earliest surviving texts from ancient Rome demonstrate a tremendous interest and knowledge about agriculture, including the benefits of spreading manure, crop rotation, cover crops, terracing and a multitude of other “best practices” that were rediscovered and embraced hundreds of years later by people as diverse as George Washington and Fidel Castro.

In fact, Cuba provides one bright spot for Montgomery as he catalogues the lessons lost and learned too late from civilizations across the world and across time. Soil fertility is currently only bolstered in many parts of the world through massive application of fertilizers, the production of which is largely dependent on the availability of cheap fossil fuels. Western embargoes and the dissolution of the Soviet Union in 1991 effectively removed Cuba from this paradigm, however, with immediate impacts on crop yields and nutrition levels in the country.

By early 1992, Cuba had already embarked on a national campaign to break up giant export-oriented state farms into small, privatized farms owned by the former employees. As they spread across the country, these small farms were characterized by labour-intensive, low-input agriculture, but, Montgomery emphasizes, they were supported and carefully guided by a network of over 200 agricultural extension offices disseminating information to farmers about biological pest control and low-input, no-till farming methods. Nutrition levels rebounded as Cuba began growing its own food again, returning from a point less than fifty years earlier when the island nation was importing over half its food. 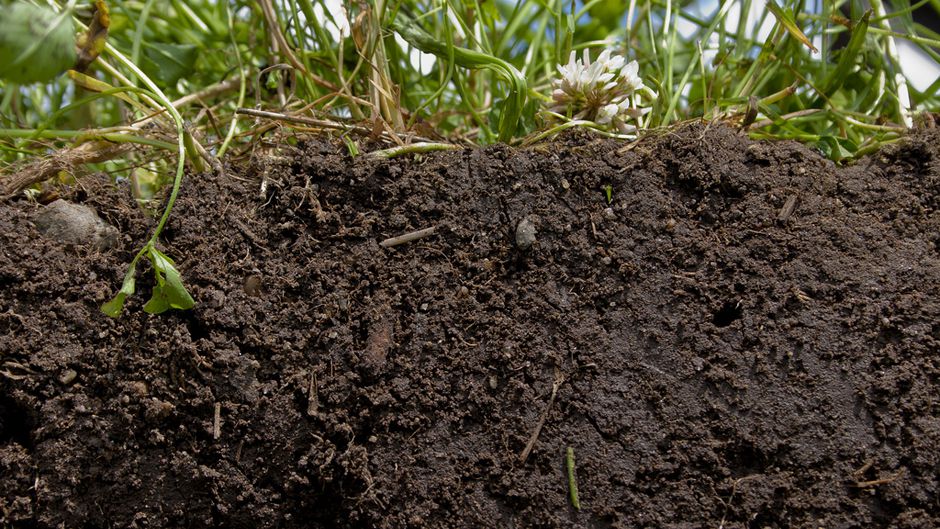 Montgomery’s book is an excellent place to gain a deeper understanding of just how important soil is for our current and future well-being. Photo: NRCS Soil Health. Creative Commons BY (cropped).

Despite a number of encouraging examples from around the world, the fact remains that at a global level our management of the Earth’s soils has been dismal. Since 1945, Montgomery estimates that some 1.2 billion hectares of agricultural land have been moderately or extremely degraded. To put that into perspective, this roughly corresponds to the size of China and India combined. On average, globally, human influence has caused a tenfold increase in rates of erosion over estimated long-term geologic rates.

Looking back over 20 years to the original Earth Summit in Rio de Janeiro in 1992, one of the key outcomes was the creation of the three so-called Rio Conventions — the UN Framework Convention on Climate Change (UNFCCC), Convention on Biological Diversity (CBD) and UN Convention to Combat Desertification (UNCCD). Although all three conventions have a common starting point, their annual or biannual Conferences of the Parties highlight current priorities (or fears), with UNFCCC meetings frequented by heads of state, CBD meetings often drawing ministers of the environment, and UNCCD meetings lucky to attract either. When the outcome document of the 2012 UN Conference on Sustainable Development (Rio+20) was released, “soil” appeared a grand total of two times, while desertification-related issues were limited to 5 of the document’s 283 paragraphs.

It is therefore heartening that 2015 has been designated as the United Nations International Year of Soils. For a deeper understanding of just how important soil is for our current and future well-being, Montgomery’s book is an excellent place to start. It is absolutely filled with portentous and unequivocal one-liners like “Petroleum-based industrial agriculture will end sometime later this century,” as well as rich historical anecdotes that connect into a troubling narrative of an underappreciated resource, slowly eroding away along with the future of civilization.

Recommended Reading for the UN International Year of Soils 2015 by Robert Blasiak is licensed under a Creative Commons Attribution-NonCommercial-ShareAlike 4.0 International License.