Sustaining Peace in an Urban World 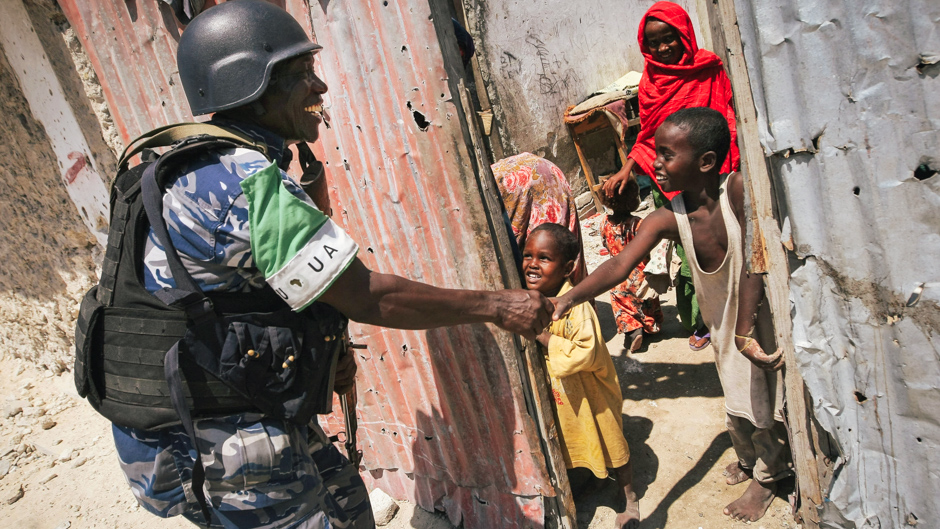 The conflict in Syria has turned formerly thriving urban centres such as Aleppo and Homs into landscapes of rubble and decay. Those escaping the violence in these cities and elsewhere in the country have fled to predominantly urban areas in neighbouring countries. This influx has placed intense pressures on housing, livelihoods and basic urban services, sometimes resulting in tensions between host and displaced communities.

Meanwhile, in countries such as Mali, Haiti and the Central African Republic, UN peacekeepers are increasingly deployed in city centres. There they often struggle to address urban warfare. The UN Stabilisation Mission in Haiti, for instance, withdrew its disarmament, demobilisation and reintegration (DDR) programme for gang members and continues to find it difficult to find a suitable DDR programme for its urban peace-building efforts.

Furthermore, the presence of UN peacekeepers can leave behind long-lasting impacts on the political, economic and social fabric of these cities, oftentimes negative. This can include compounds placing extra burdens on already fragile infrastructure and increasing pressure on scarce local resources.

Each of these examples demonstrates some of the complexities of contemporary urban violence and conflict, as well as the challenges these are bringing to the international system. On the one hand, according to a study by the United Nations University, the pace of urbanisation in conflict-affected countries has increased by 298 percent over the past 40 years. This acceleration has made it more difficult to achieve peace, bringing with it multi-layered conflict, urban violence and new forms of exclusion.

On the other hand, cities also create tremendous opportunities for their inhabitants. Human development metrics are typically higher in urban areas, a trend that holds true throughout the world. Cities also consistently rank better than rural areas when it comes to health indicators and access to basic services.

Increasingly, then, UN and other policymakers are recognising that the urbanisation process is instrumental to societal transformation. As yet, however, the United Nations is not adequately adapting its operations and policy frameworks to the new urban reality of violence and conflict.

Still, the UN system is rapidly creating new tools with which to deal with this reality. That includes adapting and transforming its peace and security, development and humanitarian responses to cope with the demands of a rapidly changing world.

Last year, for instance, parallel resolutions by the UN Security Council and the General Assembly endorsed the concept of “sustaining peace”, introduced for the first time by a 2015 review of the United Nations’ peacebuilding architecture. This idea has gained traction ever since. In one of his first addresses to the Security Council, new UN Secretary-General António Guterres stressed that sustaining peace and preventing conflict must be a top UN priority.

So what does this concept entail? Sustaining peace means going beyond short-term responses to conflict such as delivering aid or sending troops to preserve peace. These actions are still significant, but sustaining peace focuses on the importance of having a long-term vision in mind in all responses to end conflict, primarily to prevent constant cycles of lapse and relapse into conflict.

In practical terms, this means that if the peace and security sector doesn’t find ways to address the root causes of conflict — exclusion, social injustice, violence and inequality — in places such as Haiti, Liberia or the Central African Republic, it might spend billions of dollars and many years placing bandages on unrest that erupts as soon as peacekeepers leave.

If the New Urban Agenda is to provide a comprehensive guide to the urbanisation process, it must address urban violence and conflict and integrate efforts to sustaining peace into its own guidelines.

Of course, addressing root causes of conflict cannot and should not be done by external actors alone. It requires connecting better with national and local actors, including municipalities, city governments and civil society organisations.

But what does this mean for cities? At least in theory, it means that in a rapidly urbanising world, addressing exclusionary challenges and stresses that cities face every day, particularly in conflict-affected cities such as Port-au-Prince, Bangui or Kabul, becomes central from the perspective of peace and security.

The sustaining peace agenda realises that peacekeepers, peace-builders and humanitarian actors do not operate in a vacuum in these cities. On the contrary, their actions can either contribute to or harm the future well-being of cities. This approach forces the United Nations and other international actors to take account of the increasingly urban contexts in which they operate.

The UN’s discussion on cities is being bolstered by parallel global agreements struck over the past two years. The new Sustainable Development Goals (SDGs) include an urban goal (SDG 11) that places an emphasis on achieving safe and sustainable cities. In addition, the New Urban Agenda, the vision on sustainable cities adopted in October, makes reference to “conflict and post-conflict contexts”.

Yet these frameworks also fill important gaps for each other. As yet, for instance, the city is absent from the sustaining peace agenda, while the New Urban Agenda does not provide a substantive guide for how to address urban violence and conflict.

The sustaining peace agenda realises that peacekeepers, peace-builders and humanitarian actors do not operate in a vacuum in cities — their actions can either contribute to or harm the future well-being of cities.

Now is the time to devise practical frameworks that bring together the SDGs and New Urban Agenda with the concept of sustaining peace. While there have been many theoretical discussions on the importance of broadening inclusion and addressing long-term challenges in the past two years at the United Nations, the practical implications have not yet been fully understood.

Despite its significant new focus on cities, for instance, the United Nations peacekeeping and humanitarian response continues to struggle to understand the impact of rapid urbanisation. UN officials may recognise that their peacekeeping efforts are increasingly located in urban contexts and that urban actors (such as mayors, municipalities and urban dwellers) are critical to sustaining peace, but they are not framing their policy frameworks around this reality.

In order for the sustaining peace agenda to be achieved, we argue, it must attend to these urban dynamics. Likewise, if the New Urban Agenda is to provide a comprehensive guide to the urbanisation process, it must address urban violence and conflict and integrate efforts to sustaining peace into its own guidelines.

We are not alone in this call for the United Nations to pay greater attention to the urban dynamics of violence and conflict. In December, experts gathered at UN Headquarters in New York to look at how the SDGs, the New Urban Agenda and a sustaining peace approach could complement each other, as well as how urban perspectives can facilitate efforts to sustain peace in an urbanising world.

Participants made clear that these new frameworks would all require a major rethink, emphasising the need for greater localisation at the urban scale. Oscar Fernandez-Taranco, Assistant Secretary-General for Peacebuilding Support, warned that this would require a transformation in how the entire UN system operates. This would include, for instance, recognising the role of urban authorities (that remain absent in many agreements) and building local urban capacity.

Izumi Nakamitsu, Assistant Secretary-General of the UN and Assistant Administrator of the UN Development Programme noted that the different agendas present opportunities to advance integrated responses to sustaining peace. The international system needs to address the complexity of the urbanisation agenda, and more emphasis needs to be placed on the localisation of support, she stressed.

Typically, UN peacekeeping compounds and refugee camps are no longer located in rural areas, meaning that the United Nations now has missions, compounds and troops in hundreds of cities around the world. Malkit Shoshan, who lectures on “the architecture of peace” at the Graduate School of Design at Harvard University, noted that about 180 cities in the Sahel host UN bases, the structure and set-up of which have the potential to dramatically impact efforts to sustain peace.

Shoshan said that peacekeeping bases are not designed to consider the long-term needs and rights of urban dwellers in conflict-affected cities, thus often disrupting the communities they are intended to assist. She highlighted how too often UN peacekeeping camps are shut off from their local context, make no contribution to improving the lives of local inhabitants and can even compete for resources with them. If, however, the United Nations took design and urban planning into account, peacekeeping missions could be integrated into local contexts and spaces created for community engagement — reinforcing efforts to sustain peace.

Several participants also highlighted the importance of linking Goal 16 of the SDGs — on peaceful, inclusive and just societies — to Goal 11 in the contexts of violence, fragility and conflict. Urban dwellers are the most likely to fail to meet the SDGs. Importantly, if the sustaining peace agenda and New Urban Agenda are approached together, highlighting the urban dynamics of socio-economic, security and environmental stresses, connections between SDG 11 and SDG 16 will become increasingly apparent.

The December event signalled that the significance of urban perspectives and the urban dynamics of peacekeeping, peacebuilding and displacement is gaining recognition by UN officials, policymakers and member states. But more needs to be done to bridge the gaps between the peace, development and urban agendas and to move towards common responses.

Deen Sharp is the co-director of Terreform and a PhD candidate at the City University of New York in Earth and Environmental Science.

To Build Consent in Peace Operations, Turn Mandates Upside Down