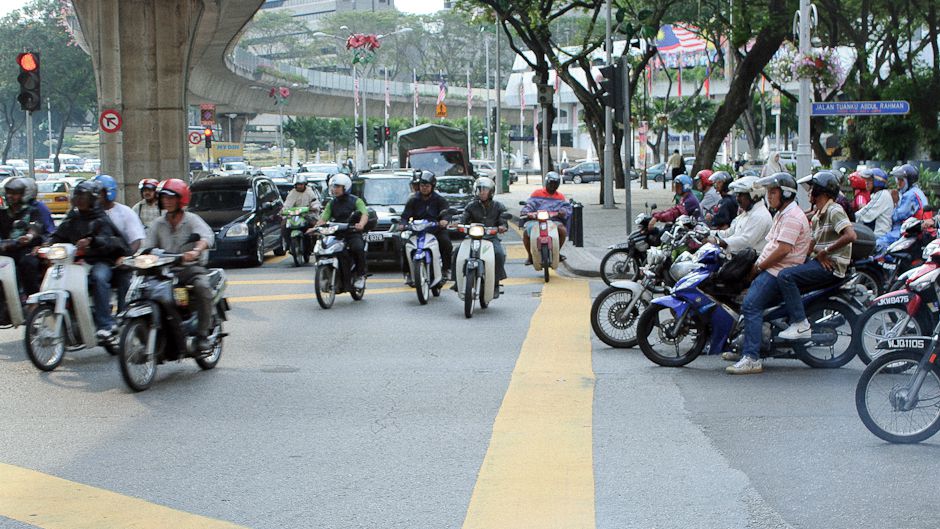 The cities of Latin America have much in common with the sprawling urban centres of the Far East, despite being two very different worlds. In terms of mobility, there is a lot to be learned: do we follow the example of Ho Chi Minh City in Vietnam, where more than 90 percent of daily trips are made by motorbike? Or do we bow to central Tokyo, where 91.8 percent of daily commuting trips are made by bus or rail?

From Asia, we can foresee the future for Latin American cities. There are at least two development alternatives: (i) bet on an economic model that aims to “grow” first, and “clean” later, usually tied to high rates of motorization, or, (ii) ensure a sustainable trend from the outset with urban development that balances economic growth, social equity and natural resource protection.

A few lessons from the first option can be seen in Kuala Lumpur and Bangkok. The Malaysian capital is a megalopolis of more than 7 million people, stretching as far as the eye can see. The city is built for cars, reflecting what is meant to be a successful model of “progress”. Packed highways dissect the city, elevated highways “decorate”’ the landscape, and non-existent sidewalks make the car the only effective means of transport.

The capital of Thailand is a little bigger, yet the feeling of mobility is similar enough, with an additional component: there are 23 motorcycles per 100 inhabitants. Between these and the reckless tuk-tuks, the traffic chaos is brutal. The lack of alternative modern, safe and comfortable public transport only reinforces the supremacy of the car and motorcycle.

In Kuala Lumpur there is a light rail system that works quite well, thousands of taxis (a law unto themselves), and buses that have little choice but to slowly navigate the ubiquitous traffic jams. One highlight is the controversial monorail: a short line with 11 stops connecting the “central” station (located strangely in the south of the city) with the financial area. As this system is not high capacity, by the time you reach the third station you find it’s already crowded.

The monorail station closest to the Petronas Towers (the brash twin towers named after the national oil company), opens on to a road intersection — the stuff of nightmares! There’s a button to request the pedestrian green light, but the light simply doesn’t exist! So to walk between the two great symbols of this city (KL Tower and the Petronas Towers), you have to run like an animal across the highway. In this city built for cars, bicycle mobility is unfortunately off the agenda.

In Bangkok, it took a long time to deliver any modern public transport alternatives. There has only been a large light rail system since 2004, and the commuter rail in use since 1999 runs parallel with several urban freeways, which basically leads people to prefer the car or the motorbike. The city is so congested that one of the quickest ways to reach the centre is the public boat canal (Khlong Sean Seap Express boat; a “must” for any visitor to the city).

In Bangkok, 60 percent of trips are made by car or motorcycle, while in Kuala Lumpur this number approaches 80 percent (only 20 percent of daily trips are carried by public transport, according to the Kuala Lumpur Structure Plan 2020). The disastrous consequences of this are a well-known cocktail for all of us: more cars, more congestion.

With more congestion, ill-informed citizens call for more roads. Given this chance to win votes (and occasionally line their pockets), politicians promise more roads. The final outcome is always the same: more roads filled with more cars, more pollution, more health problems, fewer green spaces and more cement, full stop. Is it a coincidence how much this resembles Latin America?

We see that deadly cocktail all too often in developing cities around the world. On the other hand, the Far East provides some interesting lessons on urban sustainability. Especially in two cities with among the highest population density in the world: Singapore and Hong Kong.

Singapore is a city-state that won its independence from Malaysia in the 1960s. Known today as a high-income economy, it is also recognized as one of the world’s great urban innovators. Since its first “Concept Plan” developed in 1972, the sustainability of the territory has been one of its top priorities. Early on, Singapore decided that collective public transport would be the backbone of its mobility and integrated land use with transport planning. Since the 1970s, it has consistently stressed the need to keep urban motorization under control, not in vain.

In 1975, Singapore rolled out the first version of its famous congestion charges, which have evolved into an electronic system that now adapts the level of the charges to traffic, time and speed, and seeks to discourage the use of the car and the motorbike in favour of buses and the metro.

Perhaps more innovative (and controversial) is the quota system put in place since 1990 for the sale of new cars. In order to apply for permission to purchase a new car, one has to pay a certificate of around US$50,000 and wait for the outcome of the auction of permits. After that, the new owner must pay a tax equal to 100 percent of the price of the car. Unbelievable?

Hong Kong, for its part, is made up of several islands connected to the mainland, with a highly mountainous topography. Because of this, several aspects of its transport system are simply stunning. While its metro network crosses the sea through tunnels, its tramways can climb steep slopes. A variety of boats efficiently connect the islands, and well-organized, clean and punctual buses reach every corner of the city (some even include free wireless internet). Even better: all transportation modes can be paid with the same “Octopus” smart card.

Additionally, there is a kind of fast-track pedestrian lane on the main island that connects the two main districts. This express route is made up of a system of outdoor escalators and fast walk lanes, as seen in airports, and covers an automated pedestrian route of nearly one kilometre, totally segregated from cars.

Lessons to be learned?

For now, many Latin American cities are banking on motorized urban development, which may well lead to more “carbon” copies of Kuala Lumpur. But there’s still time to stop this destructive inertia and to start designing cities for humans.

Carlos Cadena Gaitán is a Ph.D. Research Fellow at UNU-MERIT/Maastricht Graduate School of Governance. Prior to his current post, Cadena Gaitán had broad experience in different industries including working for a government relations agency in Washington D.C. and collaborating with the International Cooperation Agency of Medellín, the Carter Center in Atlanta and the New York City Department of Health. He holds a Master’s in Public Administration and a B.A. in Business Management.