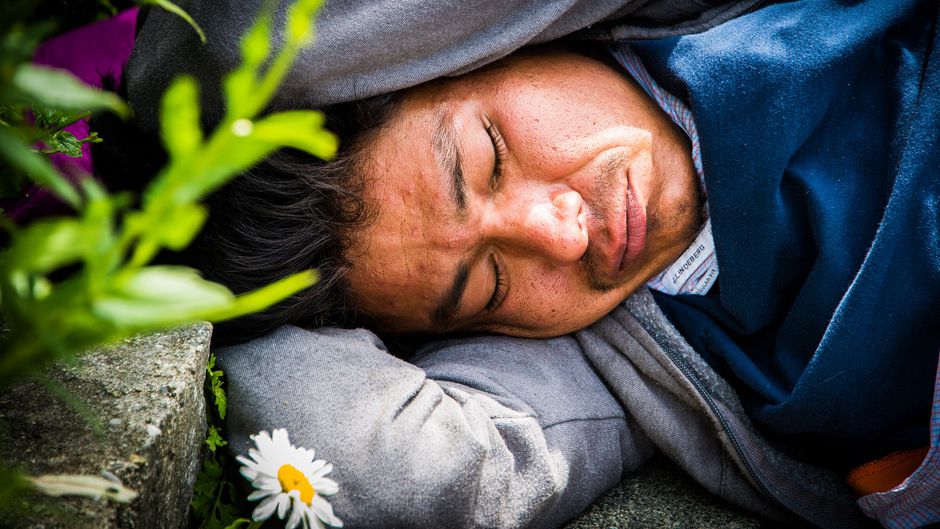 The last few months have seen major research activity in the area of inequality at UNU-WIDER. An update of the World Income Inequality Database (WIID) was first published in June. This is the most comprehensive database on inequality currently available. Considerable and meticulous work has been done on checking all the data points over the last year or so. And at the start of September our WIDER Development Conference is devoted to issue of inequality. One of the key topics to be discussed at the conference is data. What kind of datasets are available for cross-country comparisons of inequality? What should one keep in mind when using such datasets? And what do these data reveal about the extent and changes in income inequality?

The WIID collects and maintains data on income and expenditure for all countries for which this is feasible. The basic philosophy behind WIID is to provide users with all estimates of monetary inequality that are expressed either as Gini coefficients or as percentile share of income. But even if one restricts attention to these indices, inequality can still be measured in a myriad of ways — it can be before or after redistribution, it can refer to either income or consumption, the measures can have been estimated either using the whole population or for certain subsets such as only the urban population. All these choices make a huge difference to the estimated levels of inequality. Which is why WIID provides information about all these issues and, with due diligence, the user can make sure they are not comparing apples with oranges when making international comparisons of inequality.

Data quality varies enormously over countries. For some countries, we have only very limited knowledge about the data coverage or survey methods, whereas for other countries, the observations are based on high-quality standardized datasets (such as the Luxembourg Income Study database, LIS). The WIID offers a three-scale quality assessment of inequality observations. Then the user can limit the analysis only to observations for which the data quality is the highest or, to increase the scope of the countries covered, lower-quality observations can also be added to the analysis. The choice is for the user to make: the database allows (and encourages!) the user to make these decisions deliberatively and, when reporting results, advise their audience of the exact definition of inequality used.

The June 2014 update of WIID (version 3.0A) consists of a checked and corrected earlier dataset (WIID2) and new estimates from national survey statistics obtained from the respective countries’ official websites, the Socio-Economic Database for Latin America and the Caribbean, Transmonee, the Luxembourg Income Study database, OECD and Eurostat. The data covers nearly 2,000 new observations, and some new countries. The current update includes observations for seven more years, with the latest observations now reaching the year 2012. The data, along with detailed country documentation of the sources, is freely available in Excel and STATA formats at UNU-WIDER’s website.

In the update, we have also incorporated many of the extremely useful changes suggested to us by Stephen Jenkins (London School of Economics) in his review of the dataset (forthcoming in the Journal of Economic Inequality). The rest will be taken care of in the next revision of the data, to be available later this year. 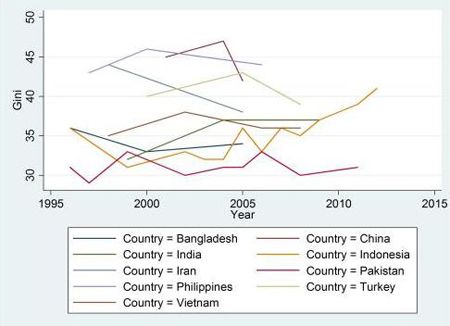 Drawing on the data of WIID3.0A, the following graphs document what has happened to inequality in the most populous developing countries (those whose current population is above 40 million).

The data reveal that there are enormous difference in the level of inequality across countries, with many developing countries facing inequality levels way above those in rich countries which have traditionally been seen as unequal (for comparison, the Gini is 48 percent in the United States).

Changes in Africa have been smaller.

Why does inequality matter so much?

Why is UNU-WIDER so interested in inequality? Perhaps there is less need to explain this now, after the publication of French economist Thomas Piketty’s Capital in the Twenty-First Century (2014). But UNU-WIDER has worked on inequality since the start of the institute, nearly 30 years ago. Our interest has remained steady for many reasons. First, the mean income level in a country does not necessarily tell us much about the wellbeing of the entire population. When income inequality is extreme, even a relatively high average level of income can be associated with a large share of absolutely poor households. Similarly, the extent to which economic growth reduces poverty is contingent on income distribution. Growth is more pro-poor, other things being equal, with lower income inequality.

Second, people tend to care about income inequality per se. Many regard societies with a more equal distribution of income as better places to live; possibly with a cost in terms of the mean income level. This idea, the so-called equity efficiency tradeoff, is central to much of economic analysis, and striking a balance between equity and efficiency in the presence of such a tradeoff requires ethical value judgments. Information about inequality and its impact is critical to policy makers when confronting such situations.

Third, a highly unequal income distribution can also hinder growth. This can happen for a variety of reasons, but one of the most important mechanisms is that unequal societies tend to lose part of their talent pool if skilled individuals with a poor background do not have access to proper schooling and jobs. Situations like this can be especially prevalent in developing countries. One of the fascinating possibilities is that there may not have to be any tradeoff between policies that enhance equity and those that foster growth.

These policies, the impact of inequality, and the impact of policies that try to alleviate inequality more generally, will all be discussed at length in the forthcoming September conference. Readers can access the conference material and presentations via the event webpage, and we’ll report on it in next month’s newsletter.

Inequality in Focus at UNU-WIDER by Jukka Pirttilä and Tony Addison is licensed under a Creative Commons Attribution-NonCommercial-NoDerivatives 4.0 International License.
Permissions beyond the scope of this license may be available at http://www.wider.unu.edu/widerangle/en_GB/feature-articles/.

Jukka Pirttilä is a Research Fellow at UNU-WIDER. He is on leave from the University of Tampere, where he is a professor of economics.