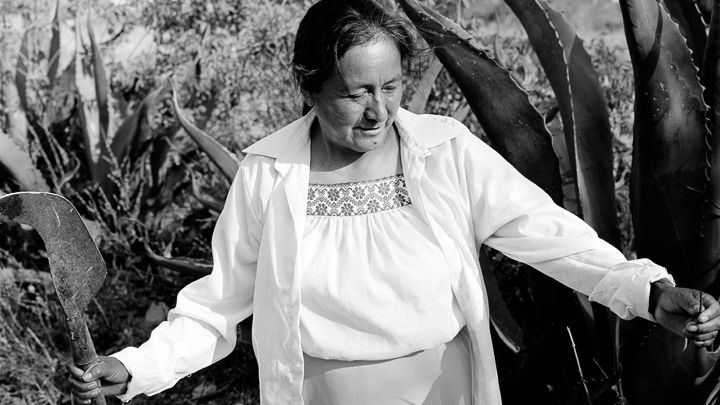 With a wooden spoon in hand, Hortencia Rómulo briskly stirs the amber-colored liquid cooking in an enormous steel pot.

“It has to reach a heavy boil so that the water evaporates, leaving the syrup,” Rómulo, 45, an indigenous Otomí woman, told Tierramérica, explaining the process for turning the nectar of the maguey, or pulque agave plant (Agave atrovirens) into something the consistency of honey.

Rómulo is one of the founders of the cooperative Milpa de Maguey Tierno de la Mujer (Women’s Maguey Crop), made up of 22 women and one man who harvest this cactus plant in the community of San Andrés Daboxtha on a 73-hectare plot, located about 120 kilometers northeast of Mexico City.

The pulque agave fields and products have become the leading source of revenues for the Otomí indigenous peoples in the central Mexican state of Hidalgo, complemented by maize crops, sheep ranching and ecological tourism.

“It has been a long process and they have learned about many areas. They have received training and have strengthened the organization. The women themselves do the marketing,” said Jocelyne Soto, delegate of the non-governmental organization Enlace Rural Regional (Regional Rural Link, ERRAC), founded in 1988 to promote productive initiatives in marginalized areas.

[quote quote=”The maguey nectar, made with the aguamiel (honey water) extracted from the plant, is a sweetener 1.4 times stronger than refined sugar.” type=”image” image=”3042″ ]

ERRAC — which also has a presence in the states of Querétaro, in central Mexico, and Oaxaca, in the south — has backed the cooperative since 1989, when efforts began in this arid zone to replant with maguey and lechuguilla agave. The maguey, which does not need much water to grow, is cultivated primarily in Hidalgo and the neighboring state of Tlaxcala, on about 6,000 hectares for a total of 12 million plants, according to figures from the Secretariat (ministry) of Agriculture and the National Institute of Statistics and Geography.

The maguey nectar, made with the “aguamiel” (honey water) extracted from the plant, is a sweetener 1.4 times stronger than refined sugar and is rich in fiber and proteins. In addition, the plant’s fructose does not stimulate insulin production like other sweeteners do.

The agave nectar was widely consumed by the native peoples of the region prior to the arrival of the Spanish Conquistadors. They also considered it an energy-giving cure.

The indigenous communities used most of the aguamiel to make the beverage later substituted by the Spaniards with sugarcane.

“For many years, maguey has been an important source of income,” Francisco Luna, an expert with the Technological University of Valle del Mezquital, told Tierramérica.

Lifeblood of a rural economy

There are approximately five million families in Mexico working in the rural economy, according to the National Institute of Statistics and Geography.

By 1995, growers were looking for better crop options, because pulque, the alcoholic beverage traditionally made by fermenting the juice extracted from the heart of the maguey, had been displaced by other alcoholic drinks. So they learned how to extract the aguamiel and to make the maguey syrup.

Incorporated since 2000 and with a “green seal” from the German Certification of Environmental Standards, the women operate a plant with the capacity to produce one ton per week, with stoves run on solar energy and natural gas. Most of their products are sold in central Mexico and the northern state of Sonora.

[quote quote=”The Swiss organization Globosol provided soft credits to install the parabolic solar reflectors, which made the cooperative the first to use solar energy in food processing.” type=”text” ]

The juice can be extracted from the plant after 10 years of growth. Each plant can undergo scraping to extract the juice twice a day. The nectar taken in the morning is made into syrup, and the afternoon nectar is made into pulque.

Ten liters of aguamiel produce one liter of syrup. Each day, the members of the cooperative cook 400 to 500 liters of the raw material.

“These days, we haven’t received any orders, but we have product stored and it can be sent as soon as they tell us,” said Rómulo, who also grows maize, oats and beans.

Several maguey-growing cooperatives have emerged in Hidalgo, focusing on the added-value potential and making the most of a growing market.

The advantage of the maguey is that the entire plant can be utilized, from the fibers of its long, pointed leaves, to the sweet aguamiel.

“We need more infrastructure. Despite our efforts, the project is not yet sustainable,” said ERRAC’s Soto. The cooperative hopes to expand this year, requiring an injection of about 13,000 dollars.

The Swiss organization Globosol provided soft credits in 2006 for 15,000 euros (20,130 dollars at today’s exchange rate) to install the solar mirrors [parabolic reflectors], which made the cooperative the first to use solar energy in food processing.

“There are only a few industrial initiatives (for maguey). The government’s support is not enough, and we could take better advantage of the market,” said university expert Luna.