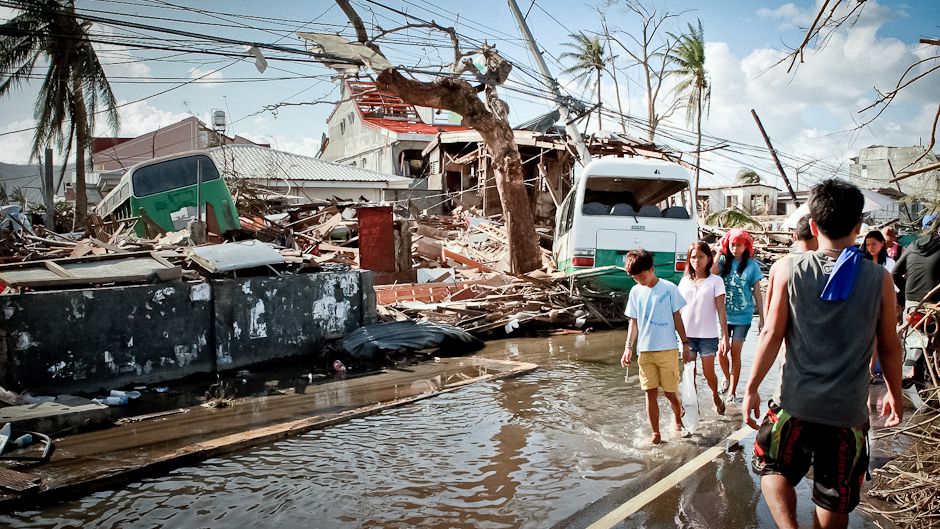 In an emotional opening to the new round of climate talks here in Poland, Yeb Sano, the chief of the Philippines delegation, with tears rolling down his cheeks, said he would not eat before the end of the two weeks of negotiations until a substantial deal had been done to help countries deal with the effects of climate change.

His appeal to the United Nations Framework Convention on Climate Change 19th meeting came after the conference had already stood in silence to pay its respects to the victims of super-typhoon Haiyan. He described how his brother had lived through the disaster and helped carry bodies from shacks wrecked by the wind.

“In solidarity with my countrymen who are struggling to find food back home and with my brother who has not had food for the last three days, I will now commence a voluntary fasting for the climate. This means I will voluntarily refrain from eating food during this COP until a meaningful outcome is in sight.”

After his pledge Sano received an unprecedented standing ovation from the representatives of the 195 countries at the opening ceremony.

At a press conference Dr. Alicia Ilaga, a member of the delegation, said the damage from climate change was already a reality in her country. Before the last climate conference in Doha in 2012 the Philippines had suffered a category five typhoon that had killed 1,000 people. And now, before this conference, had come another category five, killing an estimated 10,000 at least.

“The financial mechanisms to help us are all ready, but the coffers are empty,” said Dr. Alicia Ilaga of the Philippines delegation.

“We have suffered 22 typhoons this year. We cannot manage this kind of abomination on our own. It is not of our making. We are supposed to be developing and adapting to climate change, but coping with these kinds of events is beyond our capacity already. We appeal to countries here to feel our pain and irretrievable loss.”

The developing countries all want the newly established Green Climate Fund to receive money from the richer countries so they can begin to adapt to a warming world. A new programme — called “loss and damage” in the conference jargon — is to help developing countries cope with the results of climate change, like super-typhoons.

Dr. Ilaga said: “We cannot do anything about our geography, we are in the middle of the typhoon belt. The financial mechanisms to help us are all ready, but the coffers are empty.”

After the emotion, the politics of the conference took over. The Polish hosts are under attack from green groups because of the Government’s support of the coal industry, opening new lignite mines and power stations.

“The Polish Prime Minister] does not care about my future or that of my children, he is looking for current electoral success,” said Climate Action Network member Julia Michalak.

Julia Michalak, a Pole from the Climate Action Network, said the Polish Prime Minister was in the hands of the state-owned coal company. He had lowered expectations from the conference and blocked European Union progress on emission targets. Poland simply did not deserve to host such a prestigious event, she said.

“He has declared that coal will be at the heart of the energy sector for the next decades and he is mainly responsible for people in the here and now, and not for future generations. So he does not care about my future or that of my children, he is looking for current electoral success.”

In reply Beata Jaczewska, head of the Polish delegation, said Poland could not phase out coal straight away. It was building new coal stations to replace old, inefficient ones and so saving emissions. The Polish Government was working towards an international agreement that covered all nations, so that the global temperature increase did not exceed 2°C above pre-industrial levels.

Christiana Figueres, the executive secretary of the UN Climate Change Convention, said negotiations needed to concentrate on developing existing funds and methods of delivering them so that developing countries could adapt to climate change.

Much was being done to combat climate change, but it was not enough. “Efforts have to be faster, higher and stronger if we are to avoid the 2°C limit we have already agreed,” she said.

Japan’s Post-Fukushima Energy Conundrum by Paul Brown is licensed under a Creative Commons Attribution-NonCommercial-ShareAlike 3.0 Unported License.
Permissions beyond the scope of this license may be available at http://www.climatenewsnetwork.net/.