Development and the ‘Wise Use’ of Urban Wetlands in Manila Bay 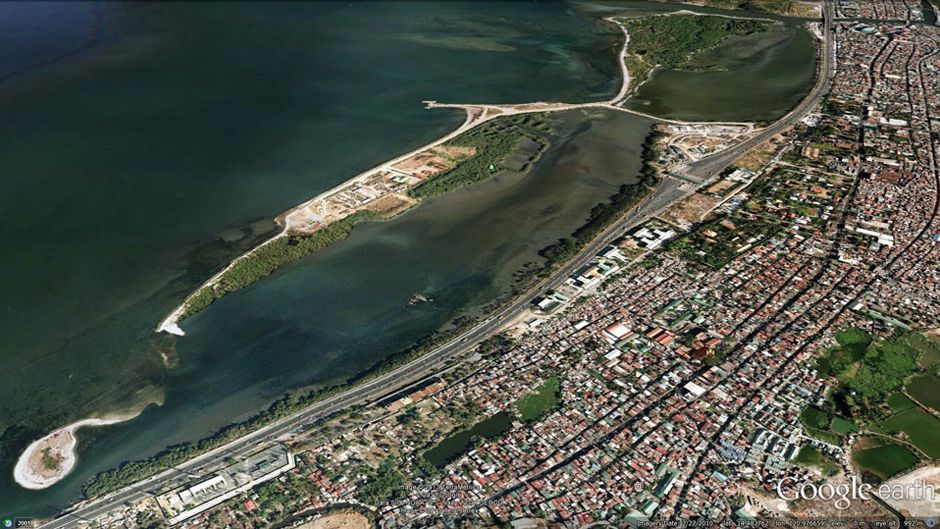 It is often said that in developing countries “biodiversity policy is development policy”. Which biodiversity (and for whom) and which development (and for whom), however, remain unanswered questions. Societies seeking development inevitably shape biodiversity through the interface of science, policy, and human institutions. As a result, opposing visions of development may affect biodiversity conservation in different ways and, together with climate change, could make the future highly uncertain for areas like the Philippine wetland we will discuss.

For a field-based research project as part of Master of Science in Environmental Governance (Specialization in Biodiversity), we were among ten United Nations University Institute of Advanced Studies students assigned to Las Piñas-Parañaque Critical Habitat and Ecotourism Area (LPPCHEA) in Manila Bay, 15 km south of Manila, the country’s capital. Today, LPPCHEA faces a controversial debate over its future standing: will it remain one of the world’s most important wetlands, or will it be reclaimed as a part of the city development project in Manila Bay?

We were tasked with creating a Communication, Education and Public Awareness (CEPA) Plan for biodiversity conservation in LPPCHEA, as per the Convention of Biological Diversity (CBD). The plan aims to identify which factors are required for ecological well being and which fit with the people’s socio-economic reality, as well as to guide collective action towards meeting development goals while maintaining the wetland’s ecological functions upon which residents’ livelihoods rely.

The area is rich in biodiversity including more than 50 bird species and the nilad plant from which Manila derives its name, is no longer found in Metro Manila, except in this area. LPPCHEA is the breeding home and habitat for a wide range of species and, as part of the East Asian-Australasian Flyway, it is important for 15 migratory bird species during the non-breeding and northward migration periods, supporting a large proportion of the flyway population.

LPPCHEA is also the last remaining wetland within Manila Bay, where, despite governmental reassurances, other areas have been reclaimed and developed for commercial and industrial uses. Interestingly, the islands that comprise LPPCHEA emerged from a Manila Bay reclamation project half a century ago that remained unfinished and, when left unattended for a few decades, transformed into an important habitat for many species.

The outer area of LPPCHEA and its surroundings are inhabited by families who have gradually relocated from other parts of the country and now live on or by the water (and commonly referred to as ‘floating communities’) as well as by a mix of immigrants and long-time residents of the cities of Las Piñas and Parañaque, off whose shores the wetland is found. Numerous secular and religious non-profit organizations work in the area along with the municipal governments and other civil society organizations including locally based cooperatives and hospitals. 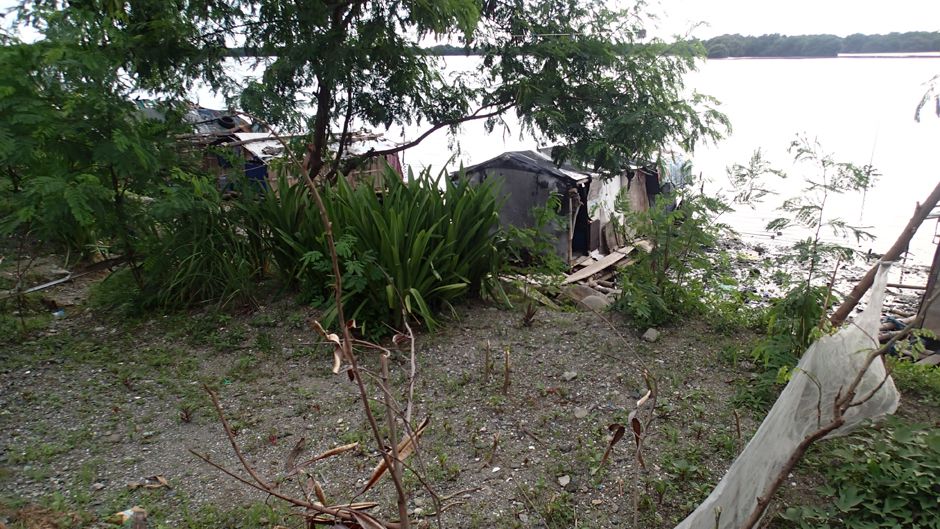 Garden and house in the floating community of LPPCHEA. Photo: © Volker Mauerhofer.

In 2007, LPPCHEA was established by virtue of a Presidential Proclamation to protect the critical habitat’s rich biodiversity and wetland ecosystem from the continuous degradations seen in the past decades. One year later, the proclamation was amended, to direct the Department of Environment and Natural Resources (DENR) to convene and chair the Manila Bay Critical Habitat Management Council, which also includes non profit and people’s organizations with direct stakes in the area.

LPPCHEA is the first critical habitat established in the country and is now the sixth so-called Ramsar site in the Philippines, after its March 2013 listing as a wetland of international importance under the Convention on Wetlands (signed in Ramsar, Iran, in 1971 and also known as the Ramsar Convention). This newly acquired international engagement comes with responsibilities: as a Ramsar site, one of the main commitments is to ensure effective management incorporating the ‘wise use’ of the wetland. 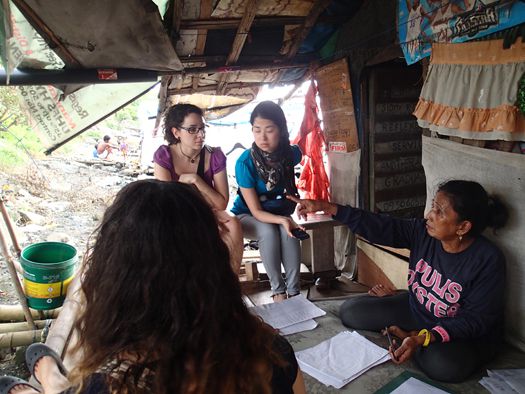 Students interviewing a resident of the floating community in LPPCHEA. Photo: © Volker Mauerhofer.

Given the waterfowl species-centric origins of the Ramsar Convention (its conception can be traced to the 1962 “MAR” Conference on conservation and management of temperate marshes, bogs and other wetlands) international communities have continuously revisited the evolving concept of ‘wise use’ under the Convention. The recent listing of LPPCHEA highlights the core debate about the definition of ‘wise use’ with reference to the existing, as well as desired, use of the wetland by local communities.

We UNU master’s students observed the clear interrelationship between nature and human society through our fieldwork. However, different groups seemed to have different stakes in and visions of development regarding LPPCHEA and its neighbouring area, such as using it for ecotourism, as a source of food and biofuel and as a newly reclaimed development site. Moreover, we observed that the local involvement in the discussion of the ‘wise use’ of the wetland can still be improved. Therefore, our CEPA Action Plan proposed a comprehensive network through which all stakeholders can communicate, educate and raise awareness with one another to debate and realize the ‘wise use’ of LPPCHEA.

To meet the requirements of the Ramsar Convention, all related parties are encouraged to undertake activities to communicate, educate and raise public awareness of the subject wetland of international importance, which are to be consolidated into a CEPA Plan. Our student proposal consisted of a set of action plans for increasing communication, education and public awareness among the groups that have stakes in the ecosystem services provided by LPPCHEA, and who thus are also responsible for environmental conservation and/or degradation of this site.

The general action proposal for all stakeholders included raising awareness to the public on the very existence of LPPCHEA, as our study revealed that many neighbouring residents are unaware that there is such an area near them. Individual action plans for stakeholder groups were designed as a practical guide that could get all stakeholders actively involved and motivate them to appreciate the biodiversity and ecosystem services they receive from LPPCHEA. The CEPA Action Plan’s core messages to stakeholders are: 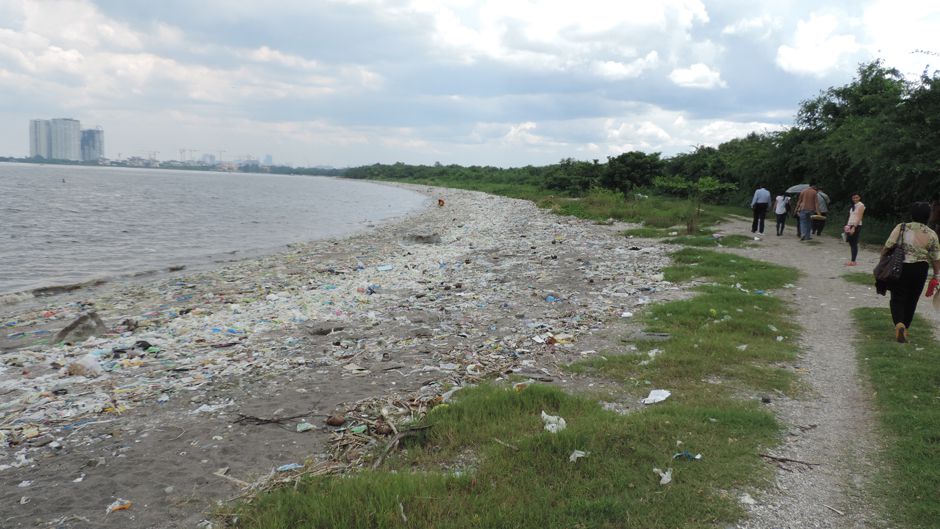 Solid waste accumulation along the bay of Freedom Island, one of the two islands that form part of LPPCHEA. Photo: © Volker Mauerhofer.

Nature and humans are deeply interconnected and the associated human interactions are highly complex, which in the case of LPPCHEA, is evident. It is difficult, for instance, to recognize and meet the needs of the floating community living in the areas of LPPCHEA that fall under the jurisdictions of the towns of San Dionisio and La Huerta without first understanding the critical role of non-profit organizations to discuss, design and put CEPA actions in place. It is also relevant to acknowledge the decisive role the faith groups have played, most prominently the Catholic Church, in binding together important stakeholders and opening fora for public discussion regarding environmental issues; their activities also reach students and pupils through formal education mechanisms.

Indeed, making biodiversity relevant to the impressions and daily lives of the stakeholders, especially marginalized communities, is and will be crucial for the conservation and ‘wise use’ of biodiversity in LPPCHEA. Encouraging the stakeholders to envision and voice the kind of development they want to see in LPPCHEA as part of the decision-making process is vital in identifying the best strategies for addressing the issues that currently affect the wetland.

All stakeholder groups are interconnected and find a common ground in the conservation of this critical habitat and such relationships will be the basis for the successful protection and the ‘wise use’ of this Ramsar site. Further, developing management strategies of LPPCHEA that incorporate this concept, would set a precedent and a leading example of well-managed critical wetlands in the Philippines as well as in the international community.

Development and the ‘Wise Use’ of Urban Wetlands in Manila Bay by Paula Fernandez-Wulff and Hitomi Roppongi is licensed under a Creative Commons Attribution-NonCommercial-ShareAlike 4.0 International License.

Hitomi Roppongi is a multi-disciplined researcher with training in biodiversity, public policy, international relations and finance around the world. She is currently involved in the 5th edition of Climate Legislation Study at the Grantham Research Institute on Climate Change and the Environment (London School of Economics and Political Science). She previously acquired work and academic experience in biodiversity and various environment-related policies while pursuing an MSc at the United Nations University. She also read international law and public management and holds a Master of Public Policy from Kyoto University. In her undergraduate years, she was delegated to the 2006 St. Petersburg Summit as a country specialist for Japan while researching at the G8 Research Group (University of Toronto). Hitomi also has professional experience working on trade control and operational improvement in financial industry.