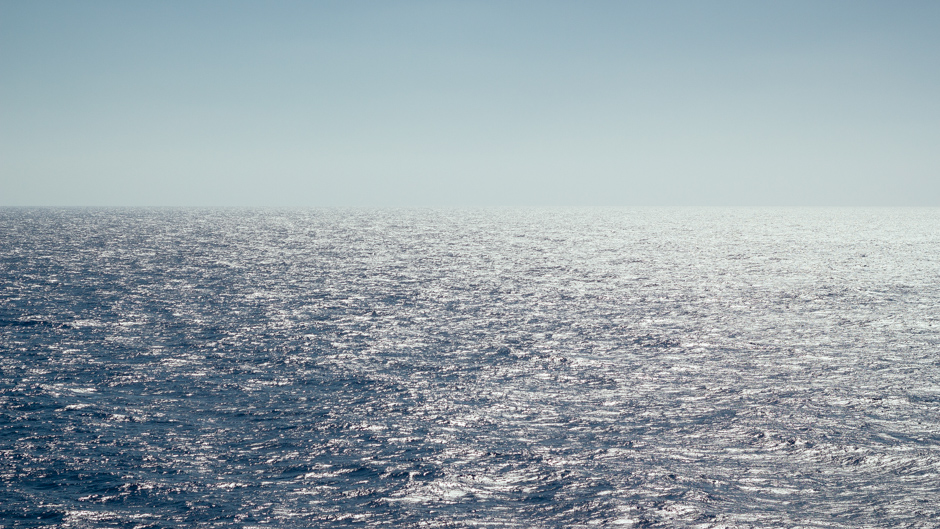 “An ocean without its unnamed monsters would be like a completely dreamless sleep,” wrote the American author John Steinbeck in 1951. Perhaps he could sleep easy knowing that more than 60 years later, the depths of the ocean are still a place of great mystery: remote, inaccessible, unknown.

While the remoteness of these areas once shielded them from most human interference, recent decades have seen a rapid growth in new technologies that are rendering them more and more accessible. Such innovations have brought an accompanying increase in potentially harmful activities, such as seabed mining and unsustainable fishing.

These developments have also highlighted substantial gaps in the legal framework for the conservation and sustainable use of resources in marine areas that lie beyond national jurisdiction.

How big is the problem? First, we have to ask how big the areas beyond national jurisdiction are. A key principle for the oceans is the exclusive economic zone, generally a 200-nautical mile – around 370-kilometre – band of water surrounding each coastal country.

Each country enjoys a range of freedoms related to the management of resources within their exclusive economic zones. More or less everything beyond 200 nautical miles is considered an area beyond national jurisdiction. That’s hundreds of millions of square kilometres, or roughly half the surface of the Earth. 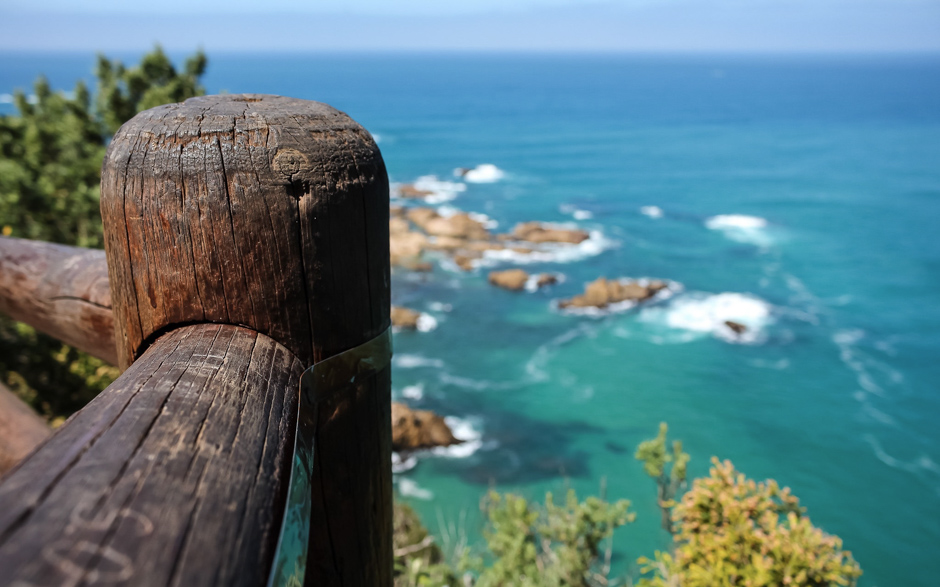 Gaps in the legal framework for an area this large would seem to be a big problem indeed.

The United Nations General Assembly thought so too. In 2015, it issued a resolution, which called, among other things, for the establishment of a preparatory committee to discuss the potential text of a legally binding agreement on the conservation and sustainable use of biodiversity in areas beyond national jurisdiction.

The committee met twice in 2016 at the United Nations in New York, and will meet twice more in 2017. Its mandate covers a “package” of four different elements:

Two important caveats have been imposed on the process from the outset. First, any agreement must include all four elements. Second, the agreement may not undermine any existing conventions or legal frameworks. Basically, it’s all or nothing, and don’t step on anyone’s toes in the process.

Still, in an age when international processes are frequently stymied by political tensions and individual interests, the resolution to proceed was a consensus decision, providing a promising basis for moving forward with negotiations.

In research published this month, we have assembled an international team of researchers to examine various aspects of the negotiations.

We set out to answer three questions: which states are actively participating in the negotiations? What is the scientific and technical capacity available to state delegations? And what are the priorities of states as they seek to shape the agreement?

The first question yielded some sobering answers. The Organisation for Economic Co-operation and Development (OECD) counts among its members 35 of the world’s most industrialised economies. Our analysis of participation throughout the most recent meetings shows substantial over-representation by OECD member states, while small island developing states and least developed countries are substantially under-represented. 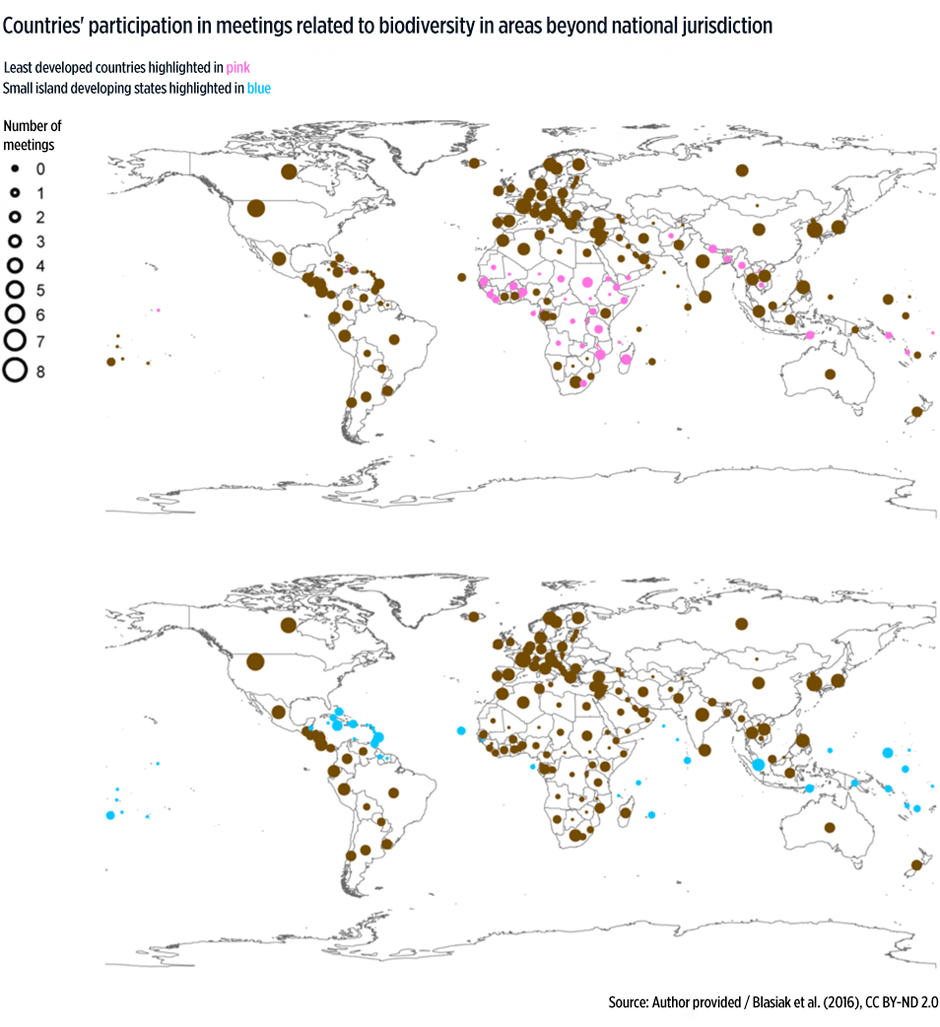 The second question touches on the scientific and technical capacity of state delegations. Here as well, conditions seem inauspicious for balanced and representative negotiations.

We conducted a survey of peer-reviewed literature which found that 98% of the authors of such work were based in OECD states. Just five of these countries accounted for more than 70% of the authors, while 163 countries were not represented at all. This suggests that most of the world’s countries would likely have little domestic expertise to draw on to inform and support their national delegations.

Even if participation in international meetings on the high seas and the capacity to effectively negotiate varies across states, this would not necessarily be a problem if all states had similar priorities.

Our third research question looked at precisely this issue by collecting all the statements submitted by delegations during the first meeting. We used data mining to see just what issues came up most frequently.

We once again grouped states into OECD members, small island developing states and least developed countries. Again, we found a high level of variation among the groups, this time with regard to the frequency with which delegations mentioned one of the four package elements. 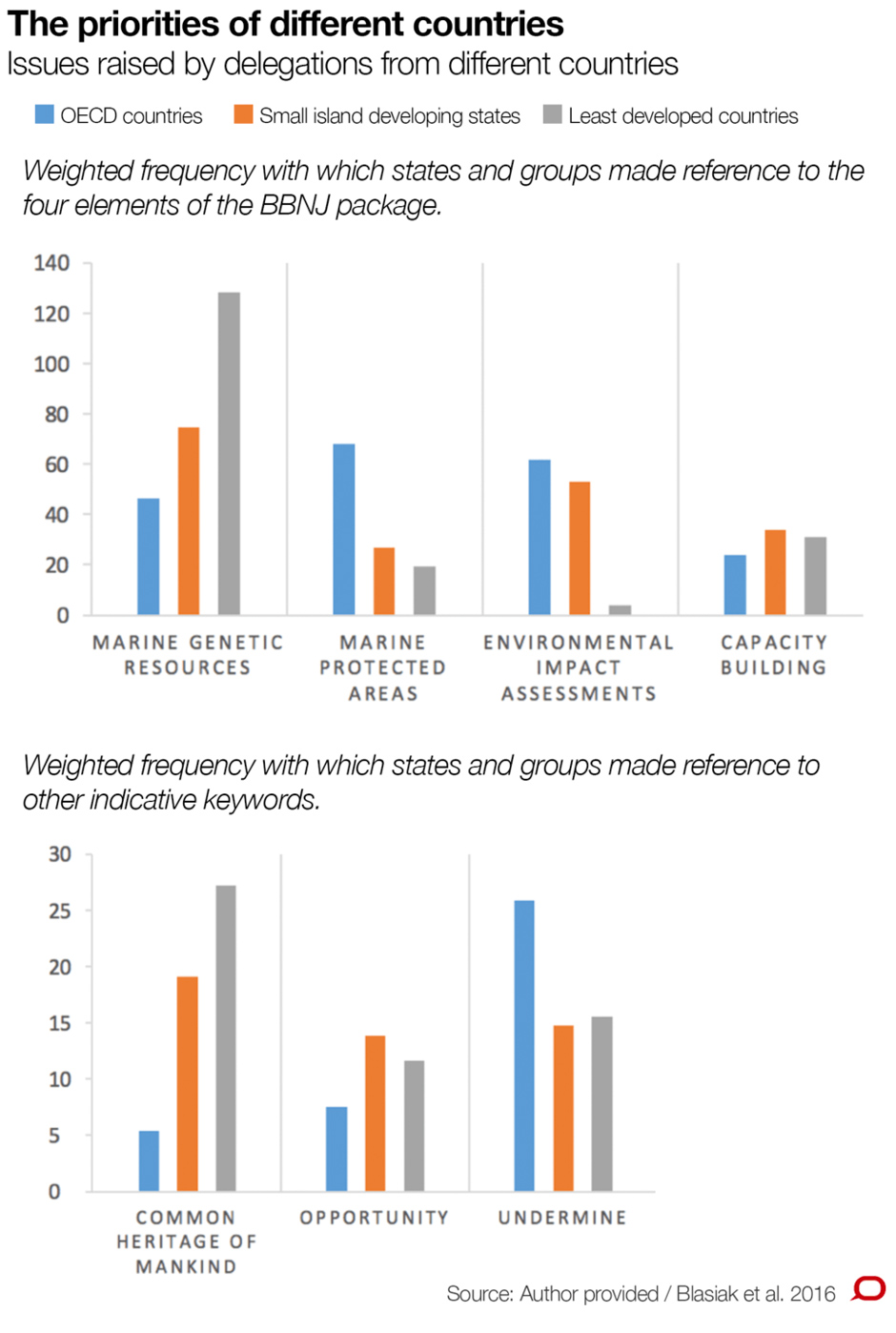 Benefits and dangers of dominance

One of the key issues at the heart of the negotiations is the balancing of two key principles. “Freedom of the high seas” is the notion that, to the greatest possible extent, areas beyond national jurisdiction should be open to all states. “Common heritage of mankind” means that certain resources and areas should not be exploited by one coutry, but rather benefit humanity as a whole.

Management of areas beyond national jurisdiction is currently split between the two, with many activities falling under a general paradigm of freedom of the high seas with various accompanying regulations.

But some resources, most prominently seabed minerals, are specifically managed as the common heritage of mankind, with mechanisms in place to share the benefits accrued from their exploitation.

The future of states that have long been de facto excluded from activities in areas beyond national jurisdiction due to a lack of marine technology or investment will likely be shaped, to some extent, by how these two principles are applied.

Considering that OECD states are among those most active in areas beyond national jurisdiction, their sustained interest in the issue is unsurprising. But the imbalances in participation also suggest the resulting agreement could be skewed towards the interests of a relatively small group, leading to unequal ownership and buy-in, and corresponding compliance gaps.

What’s more, states have agreed on a range of global commitments, including the Sustainable Development Goals to reduce such inequality, including relevant specific targets to “increase the benefits to SIDS and LDCs from the sustainable use of marine resources”.

Of, by, and for all states

Encouragingly, the same UN Resolution that established the committee also called for the creation of a special voluntary trust fund. The fund would be responsible for:

But, to date, only a handful of states have dedicated resources to the trust fund. They should be commended for their efforts and serve as an example to others.

Even this is just a first step, because our research shows that simply being in the room is not enough. The technical and scientific capacity of states varies tremendously, suggesting a substantial potential for other states and civil society organisations to contribute to a more equitable outcome through sustained capacity building and knowledge transfer efforts.

Considering the vastness of areas beyond national jurisdiction and the challenge of policing such a large area, self-interested compliance with the agreement by individual states may be the key to ensuring long-term conservation and sustainable-use targets.

But any perception that the international agreement is being principally shaped by a handful of countries that are already reaping the greatest benefits from such areas is likely to undermine such possibilities.

In the long-term, it’s in the best interest of highly industrialised states as well as civil society and inter-governmental organisations to ensure that all states are in the best position to assert their interests, and contribute to shaping the international agreement on biodiversity areas beyond national jurisdiction.

This article is co-published with The Conversation.

Efforts to Conserve the Oceans and Share Their Resources Show Serious Disparities among ‘equals’ by Robert Blasiak and Jeremy Pittman is licensed under a Creative Commons Attribution-NoDerivatives 4.0 International License. Permissions beyond the scope of this license may be available at The Conversation.

Jeremy Pittman is currently a Liber Ero Postdoc Fellow with the School of Environment, Resources and Sustainability at the University of Waterloo, Canada. He studies governance in complex social-ecological systems, and he has applied this lens to a range of problems (e.g., land-sea interactions in the Lesser Antilles; species at risk conservation on the Canadian Prairies). He draws on multiple concepts in his research (e.g., social-ecological fit, governance transformations) and employs a range of qualitative and quantitative methods oriented towards action research (e.g., participatory scenarios, social-ecological network analysis). Prior to re-entering academia to pursue doctoral studies he was employed with both national- and provincial-level governments in Canada and the private sector working on issues of climate change adaptation, sustainability, and environmental policy. Through his academic and professional experience, he has been lucky enough to work in rural, remote and Indigenous communities and resource-based sectors (e.g., agriculture, fisheries, tourism, mining) in Canada, Chile, Uruguay, St. Lucia, Dominica, Antigua and Barbuda, St. Kitts and Nevis, St. Vincent and the Grenadines, and Grenada.

Fishers of Eurasian Arctic Come Together in a Time of War