Getting Graphical about Climate Change 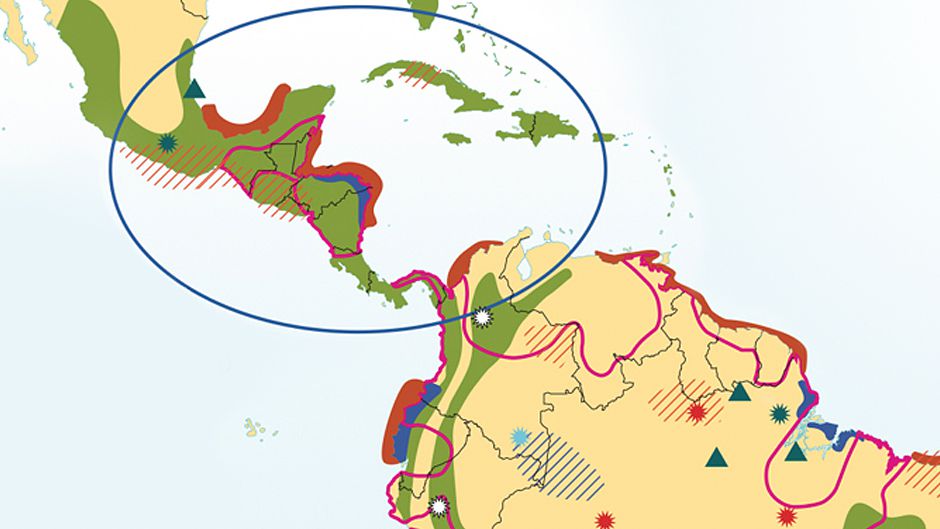 Whether you are glued to the final details or were completely uninspired to follow this year’s climate summit, one thing is for certain: you are unlikely to have heard of, much less read, more than a fraction of the reports launched there.

You would not be the only one, however. As the author of one such study reportedly told Earth Journalism Fellow Alexander Kelly last week:

“Negotiators don’t take studies into consideration. You know, you don’t expect them to pick it [the report] up and have it make a difference to what they’re saying now. That takes time.”

Indeed, the author confided that climate conferences actually double as a sort of trade show, a marketplace of ideas, where his particular report (that assesses and rates the vulnerability of 184 countries to different climate impacts) will hopefully make an impression and be stuffed into briefcases and read sooner or later.

Hopefully not much later, as news of adverse climate events come ever more frequently, despite the likely-to-continue state of political blockage on mitigating global emissions of greenhouse gases. The hundreds dead and nearly two million people left homeless these past weeks in Colombia due to the worst downpours in 60 years are a striking illustration. This year’s winter rainy season there is apparently particularly intense due to onset of La Niña, part of the El Niño Southern Oscillation quasi-periodic climate pattern that occurs across the tropical Pacific Ocean. And such meteorological havoc is set to worsen in the future.

“Recent extreme rainfall in Colombia, and elsewhere, is a manifestation of natural climate variability. However, climate change loads the ‘weather dice’ to make certain kinds of extreme events more likely. Among the predicted consequences of climate change is increased rainfall in tropical regions, including Colombia — so we expect the weather dice in future to be progressively loaded this way.

“This is not to say that climate change was the sole cause of the recent floods, but it does suggest that there is a greater risk of this kind of event occurring because of climate change,” explained Dr. Michael Raupach, who is a Fellow of Australia’s CSIRO Marine and Atmospheric Research Center and part of an interesting new initiative to help clarify climate science.

How does that grab you?

While the psychology behind widespread climate change disinterest and disavowal is extremely complex, as this recent essay underscores, more graphically presented information might help grab attention and start chipping away at global paralysis.

Perhaps reports like one released this week by the United Nations Environment Programme (UNEP) will aid laypeople in becoming more able to digest the science, with a knock-on effect of having them feel the need for more climate-shrewd government representatives. Using charts, graphs and maps, it gives a clear depiction of the major signs and physical impacts (like environmental damage and a rise in diseases) of climate change in Latin America and the Caribbean.

Here are some examples of the facts and figures found in the Vital Climate Change Graphics for Latin America and the Caribbean report:

The effects of climate change in the region are already significant (albeit with differences from one country to another), especially in terms of the agricultural sector, the health of the population, the availability of water, tourism, urban infrastructure, and biodiversity and ecosystems.

Hydrometeorological events in Latin America and the Caribbean 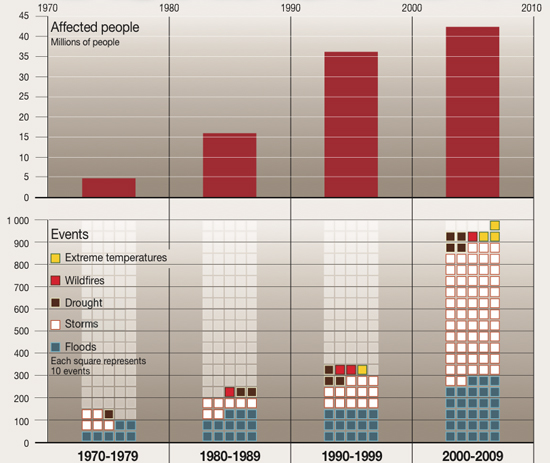 There are numerous graphics regarding glacier melt in the area that the report says give a clear indication of how climate change is affecting the region. These include this one below charting how seven Andean glaciers have shown a substantial retreat since the 1970s. (In addition, another well-illustrated report launched by UNEP this week deals specifically with the status and impact of global glacier melt.) 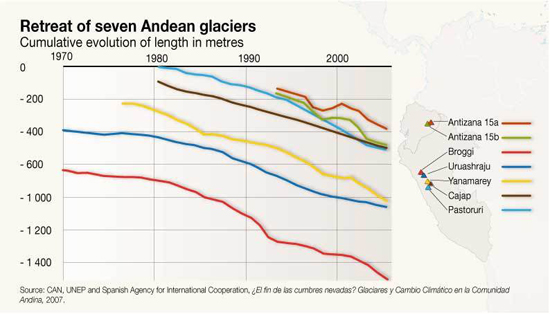 What it will take?

For those with the power to act on the science — i.e., policy makers — the report also calculates current levels of greenhouse gas emissions and possibilities for mitigation. Apparently there is some work to do. 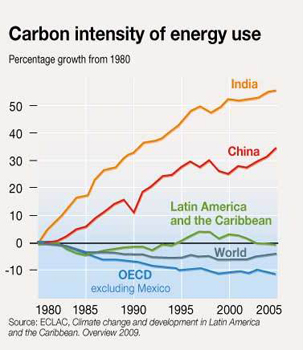 When it comes to the emissions-to-energy consumption ratio, between 1980 and 1995 decarbonization in Latin America and the Caribbean was in line with the world average, but between 1995 and 2003 the ratio increased.

Latin America and the Caribbean as a whole emitted fewer tons of CO2 per capita than the world average. However, the particularly striking graph here below underlines the fact that Brazil’s land use change is contributing the lion’s share of the region’s emissions.

Talking money, the language governments perhaps best understand, the report says that adverse weather conditions have cost the region more than US$40 billion in the last ten years alone.

For Mexico the estimated annual cost of dealing with the effects of climate change will be 6.22% of current GDP (net present value) by 2100. Throughout the region, such price tags would intensify budget constraints and complicate attempts to reduce poverty and to meet the Millennium Development Goals.

Financial impacts are of course not the only issue — the report finds that in the not too distant future (by 2050), rises in ocean surface temperature will result in more frequent bleaching of coral reefs with a negative impact on biodiversity (and its financially-valued offshoot, tourism) and fishing. See the full graphic from which the banner image of this page was extracted.

Also illustrated is the impact on human health, not only through heat waves and waterborne diseases, but also as a result of the expansion of geographical areas that are breeding grounds for vector-borne diseases. 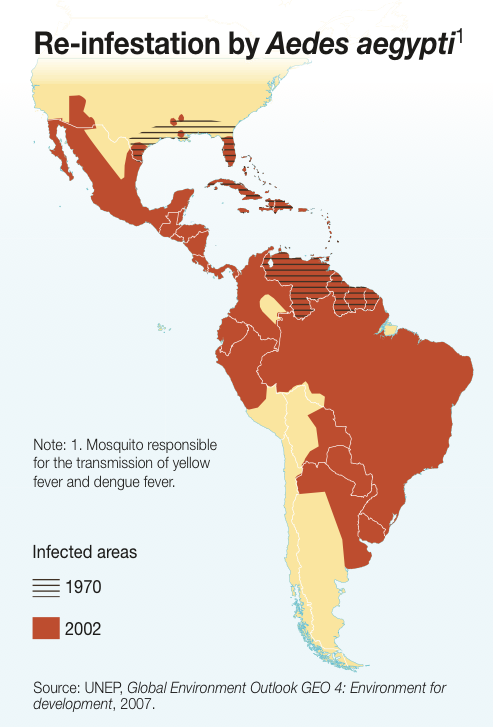 The impact that higher temperatures have on the spreading of the mosquitoes has already been recorded, as shown here. While in 1970 the only areas in the region infected by Aedes aegypti were Venezuela, Suriname, the Guyanas and the Caribbean countries, in 2002 virtually the only areas unaffected by these tropical diseases were the southern portions of the continent.

Vital Climate Change Graphics for Latin America and the Caribbean was produced in collaboration with the Sustainable Development and Human Settlements Division of the Economic Commission for Latin America and the Caribbean and UNEP’s Polar Research Centre GRID-Arendal. It is available in English and Spanish. Visit the report site to download the PDF version, read the e-book, or access all the graphics.

For wider reading, GRID-Arendal has published reports on a wide range of environment-related issues.

Getting Graphical about Climate Change by Carol Smith is licensed under a Creative Commons Attribution-NonCommercial-ShareAlike 3.0 Unported License.