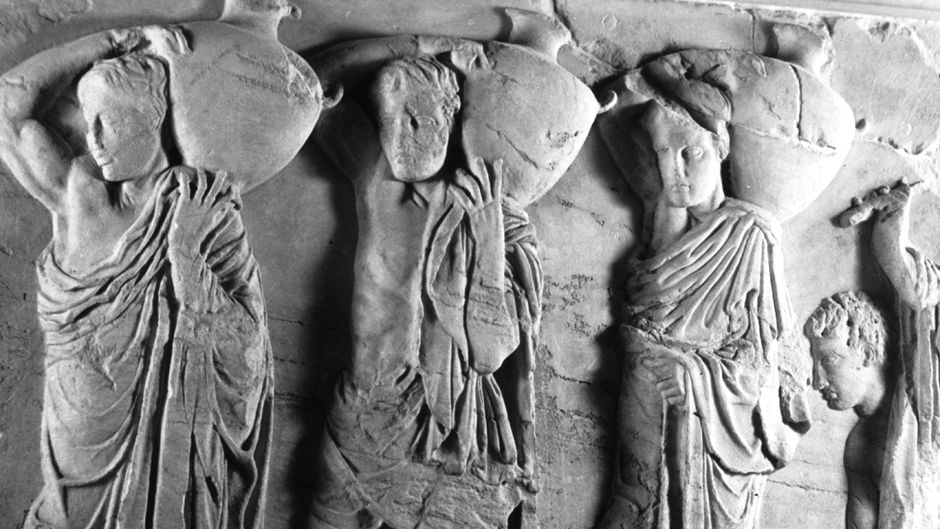 Greece knows a thing or two about democracy. And as an increasingly arid nation, good water management is fundamental to its future, both political and physical. The recent financial crisis has not only tested Greek democracy, but its water as well.

“You can tell if a society is democratic if its water is available to everyone, if it’s clean, and in public hands.” That’s how Kostas Marioglou sees it. When he is not distributing water meters and pipes from a warehouse with his job at EYATH (Thessaloniki Water Supply and Sewerage Company) he is a union leader and organizer for Initiative 136, a citizen’s initiative to buy the government’s stake in the water utility of Greece’s second largest city.

Greece is under enormous pressure to privatize its water system. As the country drowns in debt, the European Commission, the International Monetary Fund and the European Central Bank (often referred to as the “troika”) work with eager Greek political parties to balance the books by selling off public water. Greece wouldn’t be the first place to privatize public water utilities during a fiscal crisis. Conditioning loans based on full or partial water privatization is an increasingly common practice of international lenders — and much criticized.

“Although the people’s message after two elections (6th of May and 17th of June) was clearly that of renegotiating the debt and the measures imposed by the Troika,” said Theodoros Karyotis, a member of Initiative 136, “the new government continues to apply the Troika program.”

In June 2010, the Ministry of Finance announced that through the Hellenic Republic Asset Development Fund, the Greek government would reduce its shares in EYATH and the Athens State Water Utility (EYDAP), from 74 percent to 51 percent. Since then, the Ministry has adjusted the target, planning to sell off 100 percent of its holdings in the two state companies. Today, approximately 21 percent of EYATH trades on the Athens stock market.

The French water company, Suez, owns 5 percent of EYATH, and could increase its share if privatization proceeds. However, after a 2006 tour of EYATH facilities, reports George Archontopoulos, president of the EYATH workers union, company officials asked, “Why do you have [such] cheap water here in Thessaloniki?” Archontopoulos hopes that the financial crisis will make clear that water cannot be a counted on as a reliable profit center.

“Everyday, people come to central offices, trying to negotiate the water payment because even water is expensive for them.”

Archontopoulos and Mariglou are confounded by the government’s claim that it will reduce debt through privatization. An article entitled “Buying back the public, 136 euros at a time” reports that “EYATH has an annual profit of 75 million Euros (EUR) and in 2010 and 2011, despite the debt crisis, their profit rose to 12.4 million and 20.18 million Euros, respectively”. That profit margin has, however, diminished in the last 9 months.

As to privatization backers’ claim that EYATH’s sale would help Greece pay off debts, Theodoros Karyotis, an Initiative 136 member, said, “This is a silly excuse. The company’s value is estimated at 50 million Euros, while the country’s debt exceeds 400 billion.”

But if the state doesn’t want EYATH, so be it. Thessaloniki’s citizens do. In a counter-strategy to allowing the Greek state selling off shares to private investors, Initiative 136 organizers are knocking on neighborhood doors to interest Thessaloniki’s households in buying a share for 136 euros each — which explains Initiative 136’s name. That might not seem like an onerous sum for a high-income country like Greece, “but with 35 percent employment,” said Marioglou, “I’m not so sure it will work”.

Greek activists were moved by a show of solidarity at an October meeting of the European Water Assembly in Florence. There, European allies offered to help raise additional funds to purchase the company.

[quote quote=”Initiative 136’s organizers propose that the neighbourhood cooperatives decide on such issues as water tariffs and an investment budget.” type=”text” ]

The Initiative seeks to establish a network of 16 cooperatives in Thessaloniki to manage a truly public company. Because it would be unmanageable to have one large citizen body oversee the city’s entire water works, explained Marioglou, they will decentralize. Initiative 136’s organizers propose that the neighbourhood cooperatives decide on such issues as water tariffs and an investment budget. The cooperatives would play a co-management role with the public water utility and serve as water watchdogs, stewards of the public good. The union badly wants to stop the threatened privatization, but if it does proceed, the cooperatives will do their best to hold the company accountable.

Even in his halting English, Marioglou was careful to distinguish between public and state. Initiative 136 is not an effort to preserve the status quo. In fact, Marioglou bristled at the characterization of EYATH as a public utility.

“A public utility is what we want to create with Initiative 136,” said Marioglou. “Right now it’s a state company where the management is political appointments with no water service experience, running the company poorly before they move on to another party position.”

While Greece’s Communist Party is against privatization of EYATH, they don’t agree with the idea of community cooperatives. They support continued state ownership. Other left parties argue that the public shouldn’t have to buy the company from the state — it’s already theirs.

“To fix a leaky pipe, they make a big hole to make more money. It should be 2 metres but they make it 4 metres.” It rankles Marioglou that the state company has laid off almost half of the water workers in recent years — water workers who could be fixing leaky pipes.

“Why should the state company make a profit?” asked Marioglou, exasperated. “That’s the public’s money. They should give it back to people or install drinking fountains or build public toilets. Why should we be obliged to ask a shopkeeper to use their rest room? We’ll decide on public investments.”

Marioglou asserts that the cooperatives will also do a better job of ensuring water source protection. Thessaloniki draws its drinking water from both springs and the Aliakmon River. The spring water is “absolutely gorgeous”, said Marioglou, and preferable to consumers. It is also cheaper and easier for EYATH to distribute. Around 1990, the springs were overdrawn and the area ecology withered. Farmers protested and burned an EYATH facility, demanding that the company only take as much as flowed naturally.

[quote quote=”We are not fighting for our jobs, we fight for our water, for poor people who really now cannot pay the water bill.” type=”text” author=”George Archontopoulos, EYATH workers union president”]

As for sewage, the European Commission has put the Gulf of Thessaloniki on its “sensitive” list. High nitrogen discharges imperil the coastline with eutrophication. Marioglou is concerned about how sewage treatment and water source stewardship would fare in a private business guided by short-term profit interests. He fears that practices could be even worse than the current state management.

A mainstream media poll showed significant support for Initiative 136. It has never simply been a campaign to protect state jobs. There has been a hunger strike, a referendum against privatization, and large demonstrations.

“This is a very important detail,” says Archontopoulos. “Citizens sympathized with our activism. We are not fighting for our jobs, we fight for our water, for poor people who really now cannot pay the water bill.”

The Initiative also draws support from among the mayors and local town councils of Thessaloniki’s metropolitan areas. It captures people’s imagination broadly, countering the fear, cynicism and uncertainty caused by the Greek political system and the debt crisis.

Until now, Marioglou and Archontopoulos have not suffered political persecution for his organizing work. “They think it’s a romantic idea, that it will never happen,” Marioglou said. “They’re not threatened.” Not yet anyway. But Initiative 136 is just getting started.

This article appears courtesy of On the Commons and contains some editorial adjustments by Our World 2.0.

Greeks Stand up to Protect Their Water from Privatization by Our World 2.0 is licensed under a Creative Commons Attribution-NonCommercial-ShareAlike 3.0 Unported License.
Based on a work at http://onthecommons.org/magazine/greeks-stand-protect-their-water-privatization.

On the Commons Magazine

Daniel Moss is coordinator of On the Commons‘ (OTC) partner organization Our Water Commons and recently co-authored Water Commons, Water Citizenship and Water Security: Revolutionizing Water Management and Governance for Rio + 20 and Beyond. He is currently working on a project to improve urban water utilities’ stewardship of upstream water sources and editing OTC’s series on water management.