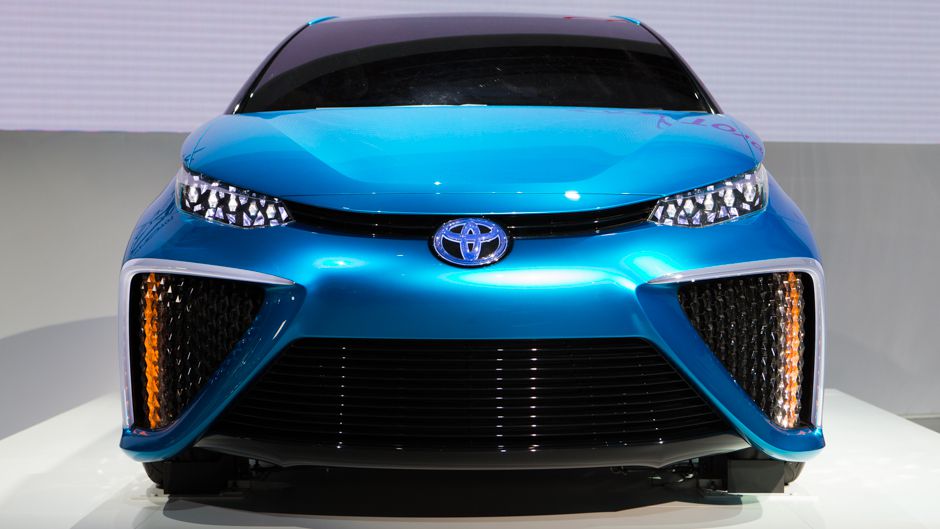 As the public streams into the Tokyo International Exhibition Center for the 43rd Tokyo Motor Show they eagerly anticipate a glimpse of the future. The crowds expect to see how modern will become magical through the automobile industry’s latest wheeled wizardry.

The 2013 event continues the show’s tradition as one of the world’s premier automobile showcases and, fitting this year’s theme of “Compete! And shape a new future”, it is also the dohyō of the Japanese car market.

Since Our World’s first visit to the Tokyo Motor Show in 2009, the event has consistently ramped up its emphasis on green mobility — hybrid electric and battery electric vehicles with low-/zero-emission engines. But this year, Japanese manufacturers are hedging bigger bets as to which technologies will lead in the future consumer eco-market. In what could be shaping up as another technology format war akin to that of VHS versus Betamax or Blu-ray Disc versus HD-DVD, the new contest appears to be battery electric versus hydrogen fuel cell-powered cars.

Battery electric vehicles (EVs) predominantly use rechargeable lithium-ion batteries, similar to those used in notebook computers and smartphones. Some of the lithium-ion benefits — including low maintenance, and the ability to hold a charge for long periods when not in use — are offset by capacity deterioration over time, slower charging, and limited driving range. None of the latest battery electric passenger cars unveiled in Tokyo get over 200 kilometers on a charge, with most hovering in the mid-150 km range. But technology breakthroughs (such as new Stanford research) could dramatically improve lithium-ion prospects. 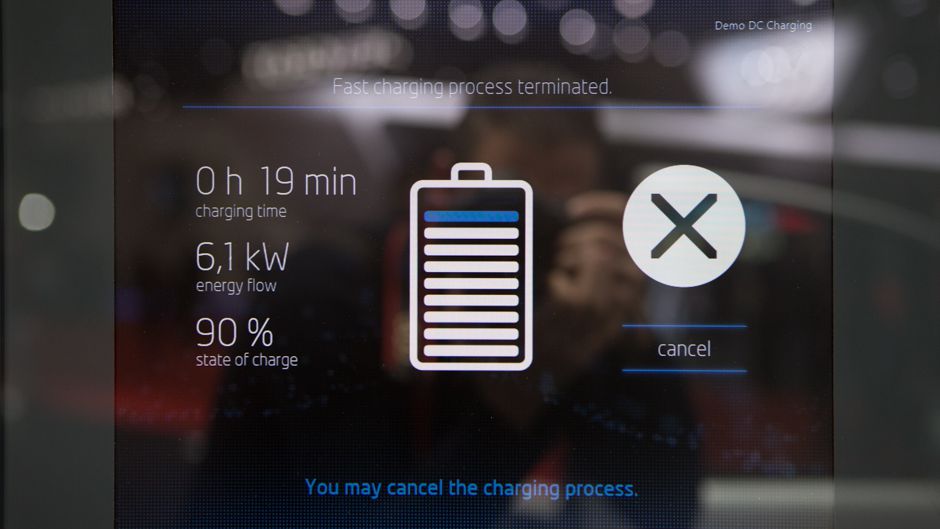 Hydrogen fuel cells don’t store energy like a battery. To put it simply, they convert hydrogen fuel and oxygen into water and the energy from that process produces electricity to power the vehicle. The reality of a mass market hydrogen fuel cell vehicle (FCV) has been stalled for a long time for many reasons, not least of which are fuel cell size/weight, safety concerns, and extremely high cost of fuel stations and fuel cells (cells were US$1 million just five years ago). But now these barriers are being overcome.

This week, Japan is leading the hydrogen push with Toyota and Honda unveiling two new concept cars slated for the 2015 market. Honda chose this week’s competing Los Angeles Auto Show to unveil their upgraded fuel cell foray — the FCV Clarity. Top Gear ranked the first iteration of the Clarity, the FCX, as the most important car of the future and the new Clarity is expected to see similar praise.

Toyota lit up Tokyo with their FCV Concept. With a nearly 500-kilometer range, this FCV will first be available in some of Japan’s major urban centres (including Tokyo, Osaka and Fukuoka) and later in the US and Europe. Toyota Chairman Takeshi Uchiyamada has been quite vocal recently about his company’s lack of interest in the battery EV market (despite owning 2.5 percent of all-electric Tesla Motors). However, both companies are far from abandoning their lucrative hybrid electric models, of which Toyota sold a whopping 1.2 million in 2012.

Although battery EVs and hydrogen FCVs share the same zero emission bonuses, the two technologies also share similar hurdles. Both formats predominantly rely on fossil fuels at their roots. Though cleaner methods are being heavily researched and major advances may not be far off, less than 5 percent of hydrogen is currently produced through clean electrolysis. Similarly, electricity production for charging EVs still relies heavily on the world’s conventional coal-fired power plants.

A second setback is a classic chicken or the egg situation — charging infrastructure is limited and this reduces consumer and manufacturer interest.

This year’s Tokyo show features a wide field of hybrid electric vehicles and plug-in hybrid electric vehicles, the latter being hybrids that can be connected to a charging station or even a household power outlet for slower but convenient at-home charging. They run great in all-electric mode but they still have that petrol-powered engine to lean back on for long hauls between charges.

From Nissan’s Leaf to Tesla’s high performance Model S, consumer confidence in battery EVs has grown significantly over the past few years. This year in Tokyo there are nearly a dozen all-electric passenger cars in the spotlight, with Nissan and Volkswagen dominating the ring. But the only manufacturer with significant sales so far has been Nissan and they are the first to admit the negative impact of “range anxiety” that stems from limited charging infrastructure.

With their pack-leading sales projected to fall short of targets, Nissan CEO Carlos Ghosn recently put a lot of blame on slower than expected expansion of charging infrastructure, frankly stating, “I would not buy a gasoline car if there were no gasoline stations.”

But at the Tokyo show, Mr. Ghosn voiced Nissan’s continued strong commitment to battery EVs saying that they in no way regret investment in electric. In fact, despite Nissan’s plans to test the hydrogen FCV market in 2017 through a partnership with US-based Daimler and Ford, Mr. Ghosn cast doubts on the 2015 trajectory of hydrogen fuel cells because they face a potentially bigger charging infrastructure problem than EV. 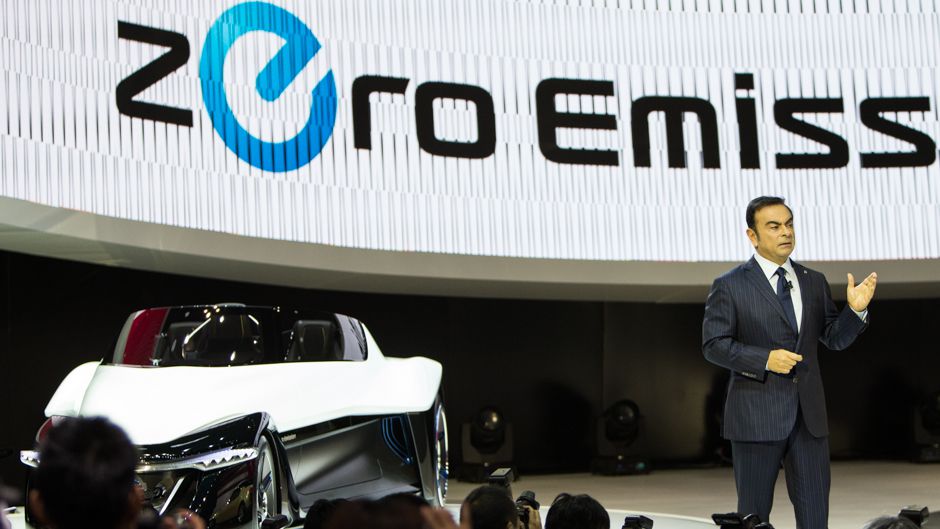 And he has a strong point. California is home to all but one of the 10 US hydrogen filling stations. The state recently passed legislation to expand from the current nine stations to 100 stations by 2024, but now at the expense of motorists instead of oil companies as originally proposed.

In Japan, the ‘Hydrogen Highway’ has been slow to develop and the country just opened its first public hydrogen fuel station this year. However, a new collaboration between some of Japan’s utilities, petroleum suppliers, and auto manufacturers, is aiming to install another 100 stations by 2015 when the new Honda and Toyota fuel cell vehicles hit the market. This could be a tough target to meet, though, and Nissan might be smart to hold out on their FCV market entry until 2017.

In contrast, there are currently about 4,700 EV charging stations in Japan and a new industry partnership, along with US$1 billion in Japanese government subsidies, aims to establish 12,000 more stations. Considering the geographic scale of the US, its approximately 6,800 EV charging stations are no match for Japan’s infrastructure and, like hydrogen, California has the majority of EV stations in the US with about 1,500.

No matter what happens in the battle for zero emission passenger car technology, urban mobility continues to seem like the perfect fit for the new wave of mini electric vehicles. This year’s Tokyo Motor Show has a great mix of small one- and two-seat EV concept vehicles and practical people movers ranging from the latest futuristic ecopods like the Toyota iRoad to the golf cart-esque Toyota T-COM.

An upper floor of the show is dedicated to Smart Mobility City where you can also test-drive a few of the mini EVs. The floor is a mix of companies and concepts demonstrating the potential for linking home, lifestyle, and urban transport through greener mobility options and context-aware vehicles, with the ultimate goal of improving efficiency, convenience and safety while injecting more community into your commute.

While this week’s vehicle announcements are definitely revealing manufacturer bias towards competing technologies, it’s clear that automakers are keeping their options flexible while the eco-vehicle market develops in concert with research advances, infrastructure development, and consumer preference. It certainly doesn’t seem that green mobility will be on a common market trajectory for quite some time.