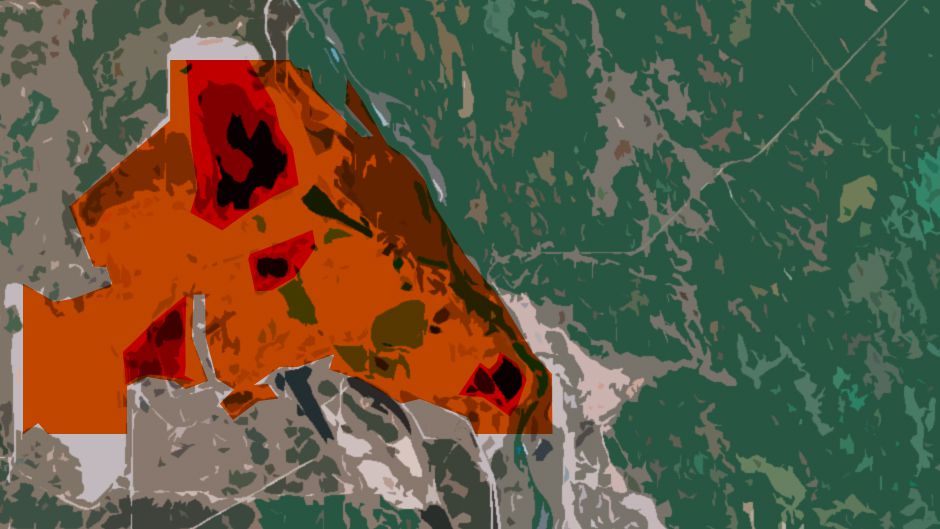 The late geographer Bernard Nietschmann once observed that “more indigenous territory has been claimed by maps than by guns”. Whether or not you agree that more can be taken back with maps, it is hard to overestimate the role of representations in the shaping of collective understandings and modes of possible intervention in political struggle.

Land use maps can have a number of applications. In many countries, they are prepared by government agencies, for a variety of reasons, or by individual groups and organizations. Often, land use maps are made publicly available for the benefit of those interested in land use trends. These maps can also become important in zoning and property disputes.

Some of the most significant efforts to map the present extent of Canada’s tar sands (and the areas of future conflict their development trajectories suggest) have been undertaken by veteran land use planner Petr Cizek. Working with Oil Sands Truth, an independent organization aiming to “to disseminate information regarding the environmental, social and economic impacts of tar sands development projects being proposed and currently in progress”, Cizek is also pursuing a PhD in the Department of Forestry at the University of British Columbia in Canada. An uncompromising critic of conciliatory politics, pop-environmentalism and efforts to reduce the tar sands to a series of ad campaigns, Cizek is the real deal. What follows are a few highlights from a long and illuminating conversation.

Q: How did you get involved in mapping the tar sands?

A: My academic and professional background is as a land use planner. I lived in the Northwest Territories for 12 years working primarily with First Nations, and I started getting into Traditional Land Use and occupancy mapping, which involved interviewing Elders and harvesters about how they used the land for hunting and fishing and trapping and other cultural uses. And GIS [geographic information system] started being heavily applied to that.

When I first started [using GIS] I wasn’t at all self-sufficient in it, I started off working with a number of technicians to digitize map data and I guess I got tired of trying to explain things to people. I wanted to do more dynamic map analysis myself, so I spent a number of years learning the software… I learned cartography mid-career, on my own and mainly as a way to process and deal with some of this Traditional Land Use Data. That spun off into many other projects, into what I guess you and others have called the Counter Mapping field.

Q: Can you comment on any notable responses to your mapping efforts in the tar sands?

A: I once got an email from a MA student working with Suncor — she was doing her thesis on revegetation and she was putting together some sort of poster presentation. She asked for permission to show the Oil Sands Truth maps on her poster, just to give context to the scale of restoration involved. I said “Sure, sure go ahead”.

Later I got an email from her that she had shown the Oil SandsTruth maps to her boss at Suncor, and he had said he really liked them. I replied to her, asking “Why does he say he likes those maps? Doesn’t Suncor ‘know’ about this?” She replied, “He really liked your maps showing the cumulative footprints, because he had never ever seen that before”. Companies like Suncor are not even allowing their own employees the chance to see the scale of what is going on here. 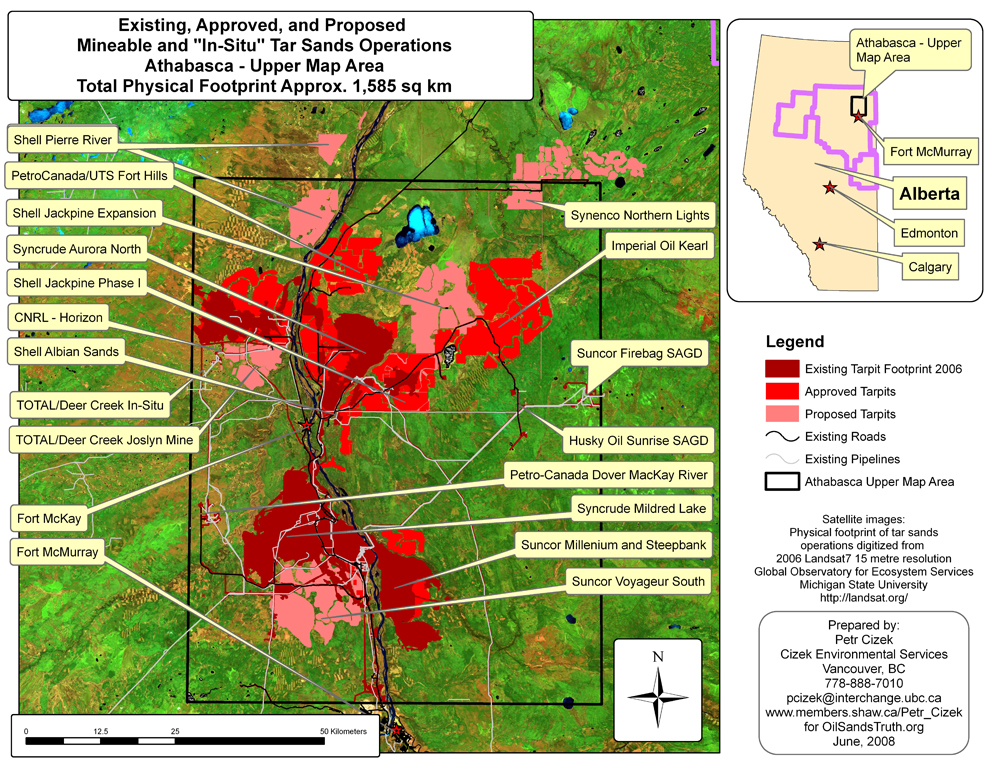 This map shows all approved mining and in-situ projects in the Athabasca Mineable Region and approved growth levels up to July 2008. ©Oil Sands Truth. (For a bigger version and more examples visit OilsandsTruth.org to see the entire collection.)

Q:  What are your first steps in making these maps, in terms of where you find information, in terms of what you decide as a proper scale — what kinds of elements are essential to the maps?

A:  When you are dealing with the mega-projects such as the tar sands, your biggest constraint in electronic mapping is having access to data; the data surrounding the tar sands is extremely closely guarded by both government and industry. Actual GIS, that is electronic data with spatial references, is 99% unavailable.

So what we are reduced to is finding images of the tar sands in two different kinds of formats. There is a lot of free satellite imagery available though the internet from places like NASA, which have made their entire LANDSAT archive available for free — which not only gives you the most recent LANDSAT images but also access to the full archive going back to 1973. This allows you to show landscape change over time, to do what is called a chrono-sequence.

The other major data source is actual image files, which might be in a PDF, which might be in JPEGs, TIFFs, and which you can get through various industry sources, such as their Environmental Impact Statements. Alberta’s Energy Resource and Conversation Board has deep within its website a place where it shows maps of all the projects of all the projects that have been approved, all of their footprints. What I’ve been doing is taking all those electronic images which aren’t geo-referenced yet, importing the files, giving them coordinates, and digitizing the outlines of the footprints — that’s how these maps of the tar sands are created. The final most significant issue is the study area or scale. Generally, it’s a very large study area with a low level of detail or a small scale, because when you combine all the footprints of these tar sands projects it’s an area which is about 100 km X 100 km.

Q:  There are a couple of questions I want to ask you out of that, and one of them has to do with information — specifically, how you might respond to the idea that we already have Google Earth — so why would we need these detailed maps of yours? Can you talk a little about the dangers out over-relying on a single source, such as Google.

A:  I’ve spent the last couple of years finding ways to load up the data that I’ve compiled into Google Earth and to show 3D views of the landscape change. If you’re talking about how are the tar sands are represented in Google Earth right now, in the raw data that you get in Google Earth, well, basically Google Earth is a combination of various satellite images at various scales — what you might call their ‘base layer’. These images are capable of showing the present and the past.

Now, Google Earth around the tar sands is a mish-mash or patch-work of generally extremely high resolution images, usually at 1m resolution so you can really zoom in to see heavy haulers (giant trucks), the texture of disturbance, and when you zoom out to try to see the gestalt of the whole thing what you see is a strange patchwork of what’s there right now.

What it doesn’t enable you to see is what’s going on the future. What people need to understand is that what’s going on in the tar sands right now is only about 1/3 of what’s been approved and planned — what’s there right now will triple in size. That’s partly what needs to be conveyed using technologies such as Google Earth. And I’m trying to also see to what extent that can be communicated not just in flat 2D maps, but also 3D maps that also show the texture of the trees, and provide a more realistic image.

Q:  That also makes me think of the fact there is planned to be so much subsurface tar sands disturbance — especially in the Cold Lake/Beaver Lake area — where the RAVEN project is focused. This would seem to inhibit standard representational mapping, because the developments are underground or are in low-resolution and hidden from the kind of view of you would get from Google Earth. Can you talk a little about these issues?

A:  Yeah. I did try on the Oil Sands Truth website to see how the in-situ projects [that inject steam to drain the tar from the sand on-the-spot rather than via open pit mining] could be mapped, because virtually no one had tried to do that. For example, by using LANDSAT as a base and digitizing what appeared to be the in situ features. What I discovered with LANDSAT, which is basically 30 m resolution, is that it is very hard to distinguish the features. What’s really going on is that unlike the open pit mines that are going on north of Fort McMurray, what you have with the in-situ landscape where there really is uncontrolled cumulative development.

How can you logically distinguish an access road which may be servicing an in-situ development site but which is also serving some conventional oil and gas that may simultaneously be servicing some logging route? On the one you can try to pull out the in situ stuff, but it is a landscape that has been disturbed by many other sectors. I did look in your blog and see the work Peter Lee has done to attempt to distinguish between the in-situ and all anthropogenic disturbance…

Q:  This is one of the issues I’ve heard from biologists and other people looking at this area. The Government of Alberta doesn’t even track changes to do with in situ, they don’t track those tertiary features like roads, so you’re only relying on singular sources from industry, and whether they even want to give it to you is another question. Can you talk to me a bit more about what mapping these developments has revealed to you — in terms of the emerging political relationships and ecological dimensions?

A: Not only have government and industry consistently avoided mapping or showing the real cumulative foot-print of development, and not only have they made it difficult as possible for the public to access data, it is also absolutely fascinating how mainstream environmental organizations consistently avoid the spatial or geographical aspects of all of this. Ninety-nine percent of the communication about the tar sands from mainstream environmental organizations has to do with these oblique aerial images of the perverse horrific beauty of vast landscape destruction. You want to talk about the image politics, it’s like the new sexy horror, which at one point was vast clear cuts, which at another was Greenpeace riding on a Zodiac to save the whales from the Russian harpoons.

What people need to understand is that what’s going on in the tar sands right now is only about one third of what’s been approved and planned.

Partly because there is almost zero interest from mainstream environmentalism to really think about the spatial aspect of this, you have things like a campaign from the Pembina, Greenpeace, and Sierra Club that at one point was explicitly about no new approvals. Well, even with the existing approvals, the tar sands are supposed to double in size, so does that mean these organizations support the doubling of the tar sands? And I raised that with them and they didn’t have an answer. But they sure can raise a lot of money, from foundations or whomever, by showing the latest seductive imagery. I find it fascinating how ‘anti-spatial’ mainstream environmental groups are. It’s very visual, but it doesn’t really matter where those visuals are from or what they are about.

This article originally appeared on raventrust.com. RAVEN is a charitable organization that provides financial resources to assist Aboriginal Nations within Canada in lawfully forcing industrial development to be reconciled with their traditional ways of life, and in a manner that addresses global warming or other ecological sustainability challenges.