Peer-to-peer Mobility and a Physical Internet 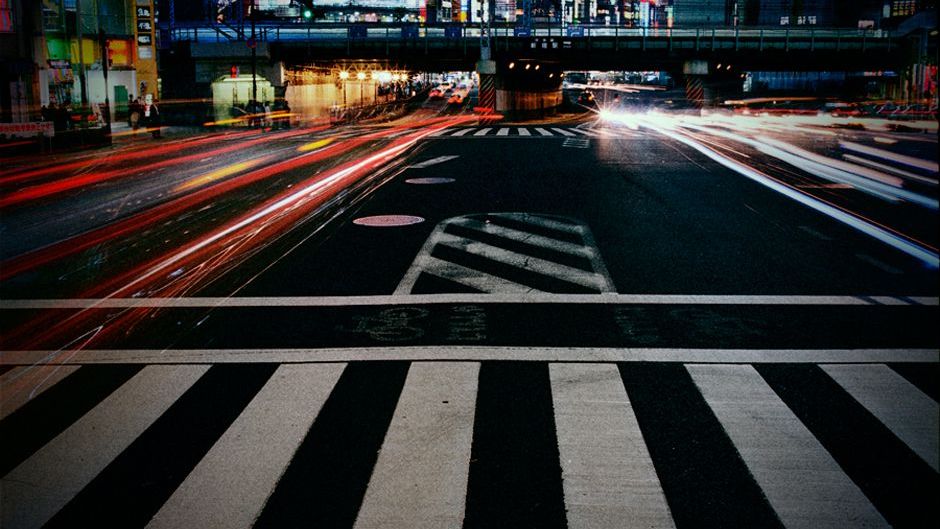 To mark the upcoming Global Sharing Day, which celebrates the building of a Sharing Economy, we bring you this inspiring look at how mobility and the transport of goods could be transformed by peer-to-peer thinking.

Consumers are able to buy almost everything online now if they choose. The Economist recently published an article on the uncertain future of the “bricks & mortar” bookshop. The Guardian predicts that the United Kingdom’s online grocery market will “double within five years”.

All these predictions lead one to believe that the only value left in a bricks & mortar shop is to display consumer goods as an art gallery would. But whereas in an art gallery the items are for sale, the shops will only be for you to look, touch and feel; nothing will be for sale and all of your purchases will be made later either at home or with a smartphone.

It’s already happening with many people I know: they go to shops to find what they like and then order the same item online for less money (including shipping).

It’s a fetishization of the consumer product where the display model is adored in public but your personal version will come from a dark warehouse on the outskirts of the city and be delivered to your house discreetly. Unfortunately for the offline shop owners, all they get out of this is worn-out merchandise and shrinking profits.

Despite some obstacles along the way, Ocado is planning on opening another massive warehouse in order to better dominate the grocery home delivery market. They have a lot of competition, there’s Tesco, Asda, Sainsbury’s and Waitrose. And if you think this trend is limited to the UK, think again: around the world retailers are delivering food to your house, even KFC and MacDonald’s. Amazon is even planning on having same-day delivery.

It seems that as we try to reduce congestion and increase mobility in cities by reducing car use, we are simultaneously replacing that traffic with delivery vehicles that are all rushing to get there on time for the scheduled delivery appointment (and sometimes causing fatalities along the way). And even if you think that public transport and cycling has dramatically reduced the number of vehicles on the road, you’re wrong; passenger cars still accounted  for 84.1 percent of inland passenger transport in the EU-27 in 2010.

Ironically, another contributor to the problem of congestion are the proposed remedies themselves. In Paris for example, the Velib scheme is great for getting more people to use bikes, but what if everyone is going to the same place? All the bikes wind up downtown and trucks are needed to bring them back to empty docking spaces where people are waiting (incidentally, one of the most effective bike schemes is actually in Berlin, where there are no docking stations and bikes are just left around randomly).

When will it get here?

Combating the ubiquity of delivery trucks and scooters is a new scheme that is growing in popularity: Cargo Bikes! You may have seen them around your city already, but get ready for more; there is a European Cycle Logistics Federation forming as we speak. 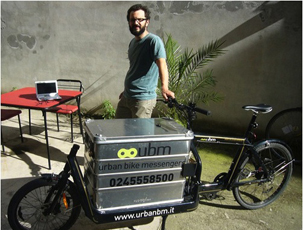 On an urban scale, this seems like a clean, quiet, healthy and safe form of transport for local products, especially when you consider this “BentoBox” plan in Berlin is actually one step closer to the physical internet project envisioned by CELDi.

The physical internet would allow for open hubs where products could be stored for people to come pick them up and deliver them to another hub, closer still to the destination and thus could break up the large job of transporting objects into small manageable pieces using the natural movements happening within the city. And the movements within a city are so predictable that the London based artist Danja Vasilev once created a “parasitic” internet using the daily motion of people and traffic in the city. It is the most illuminating illustration of what can be accomplished when you combine peer-to-peer (P2P) thinking and urban mobility.

The P2P community has already created some solutions for international transport with sites like CanUBring, mmMule, and PiggyBee. These sites allow people that are already travelling to bring goods with them to people in the cities they are travelling to. After studying these sites for some time it appears that the problem of intermodality still poses a threat to widespread take-up.

I have tried to carry goods for all these sites to various cities around Europe (I travel very frequently). I tried bringing an iPhone to Moscow to sell, but the buyer changed his mind the night before I flew. I tried ordering some Czech beer from someone who was coming to London but they were arriving in Luton and travelling northwards afterwards so this made it impossible for me to collect the goods. Since I offered to carry goods and even buy goods with about a dozen users of these sites and none of these attempts resulted in a transaction, I have come to the conclusion that until there is a P2P service or “Physical Internet” to facilitate the delivery of an object to the final destination, then these services will remain a hobby of fringe travellers and not regular international commuters.

We can already see some signs of consolidation in the P2P transport world. In France some ridesharing actors have started a common specification for rideshare offers. And in the UK there has been a move towards standardization of rideshares. Imagine now if there was one big grid of users, all willing to transport, carry or deliver certain goods in their vehicles or baggage.

This would break the large task carrying honey from Greece to a friend in Belgium into several small tasks. I hypothesize that: a local (village) honey producer will sell a product online, the producer will give it to a cyclist going to the train station, a train traveller will take the honey to Athens, then carpool with another traveller who will take the honey to the airport when they have a flight, a business traveller will meet the other traveller and take the honey to Brussels where an airport employee just getting off work will take it to the centre of town where the intended recipient will collect it. It could work, as long as you are not in a rush to get the item.

This article first appeared on OuiShare, “an open global community of passionate people (entrepreneurs, designers, makers, researchers, public officials, citizens and many others) working to accelerate the shift toward a more collaborative economy.”

Peer-to-peer Mobility and a Physical Internet by Jeffrey Andreoni is licensed under a Creative Commons Attribution-ShareAlike 3.0 Unported License.

Jeffrey Andreoni is a writer spending his time between London and Athens. His writing covers a variety of subjects from fine art to adventure travel.