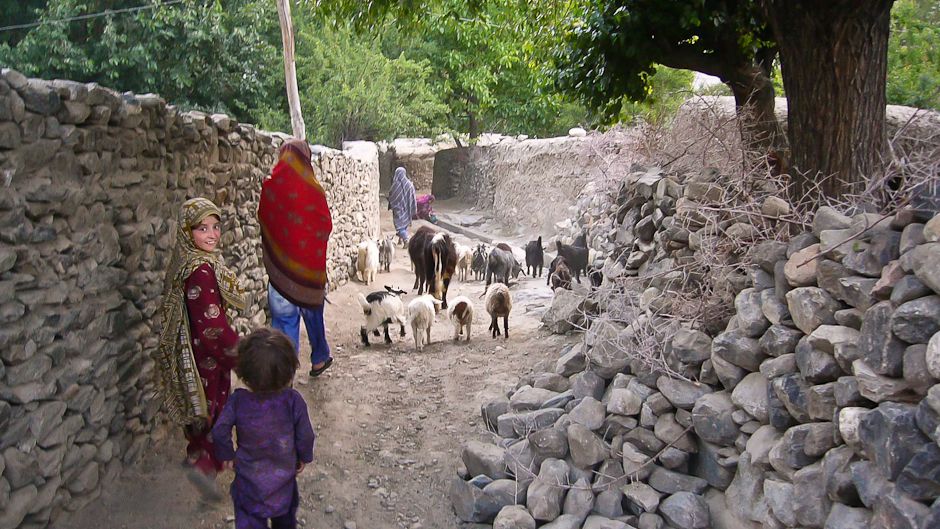 In a remote corner of the mountain district of Chitral in Pakistan is a settlement of forgotten people. Their homes were destroyed when a glacier lake burst in 2005, burying their village under boulders and rocks. They lost everything in the sudden flood and were taken a kilometre away by local government officials where they put up tents. Eventually they were given land in a rocky and sandy area near the river. Today they are struggling to survive in this place where there is little piped water.

“I had a large house in Brep, I had orchards, I was well off,” says fifty-year-old Murad Begum and begins to cry. She laments her fate, “I now live in two rooms. What kind of a life is this? I have nothing.”

“The mountain spring where we get our water supply is drying up,” explained another villager. “Every day we complain to the government, but no one is listening.”

Brep is known in the region for its delicious apples and walnuts but the few fruit trees they planted in their gardens are now drying up. They don’t have the technology to pump river water up into their homes.

Incidents of glacier lake outburst floods (GLOFs) like that which affected Brep are on the rise, especially in the summer months as temperatures rise in these high mountains. Scientists from the Kathmandu-based International Centre for Integrated Mountain Development (ICIMOD) say that warming trends in the Himalayan-Karakoram-Hindu Kush region have been greater than the global average.

Most affected are the smaller valley glaciers which, according to ICIMOD, are retreating by up to 30 to 60 metres each decade. As these glaciers retreat, they form lakes behind the natural moraine and ice dams at the bottom of the glaciers. These can breach suddenly, releasing huge volumes of water and debris onto the villages in the valleys below. So Brep’s problems are far from unique, and finding a way to prevent further disaster is attracting high-level concern.

Help is now coming in the form of a US$3.6 million project. It is one of the first projects to be approved by the United Nations Framework Convention on Climate Change’s Adaptation Fund, designed to send funds directly to developing countries to deal with the impact of climate change. It will be run by the UN Development Programme, Pakistan, which carried out the preliminary research and proposal writing.

The adaptation fund, set up in 2008, depends on grants from several European countries including Germany, Sweden and Spain. Spain has given 45 million Euros, while Germany and Sweden have each pledged 10 million Euros. The fund is expected to make money of its own from the proceeds of the international Clean Development Mechanism (CDM) levy. An adaptation levy of two per cent is currently imposed on all CDM transactions, which could raise as much as US$400 million by 2012.

In Pakistan, the project’s organisers are selecting the communities most vulnerable to GLOFs. There are potentially up to 52 vulnerable sites, according to ICIMOD, which is sharing its knowledge and experience in other mountain regions like Bhutan with UNDP-Pakistan.

ICIMOD and the Government of Pakistan are co-financing the project, whose total cost will come to around US$4.7 million. Project activities include producing studies of the size and length of glaciers and, monitoring them and also developing the capacity of local and federal institutions to deal with disasters.

The project will also enhance the capacity of Pakistan’s National Disaster Management Authority (NDMA) by helping it develop a system for the long term tracking and management of GLOFs. Risk and hazard maps for mountain valleys with high GLOF risks will also be developed, as well as risk management and contingency plans. The project proposal says Pakistan ‘faces a critical gap in the knowledge of hydrological forecasting, risk mapping and disaster prevention planning’.

Abdul Qadir of UNDP says: “Sixty five per cent of the flow of the River Indus depends on glaciers, so if their mass is reducing we need more studies to see the trends. These glaciers are the country’s water tanks and their melting will impact our agricultural security, our food security and our power generation.”

The project will include targeted mitigation measures for at least one potentially hazardous glacier lake. It will devote 80 per cent of its funds to community-related climate risk preparedness and 20 per cent to building the capacity of government institutions.

[quote quote=”Risk and hazard maps for mountain valleys with high risks will also be developed, as well as risk management and contingency plans.” type=”text” ]

Community-level monitoring of glaciers and early warning systems will be established so that those likely to be affected by GLOFs can take timely action. There is nothing that can be done locally to prevent a glacier lake from forming. But when it does, people can construct dykes to slow down the water flow and other water retention structures to protect their homes and fields. Once a lake bursts, however, there is not much they can do, other than to get out of the way fast.

Unfortunately, the people currently displaced in Brep will not benefit from the project, which only funds efforts to prevent future catastrophes. The flood in Brep lasted for around 20 days — stopping and then starting again without warning.

Some fear that it might be melting again, creating another glacial lake which could prove to be disastrous. With proper training and monitoring and with an early warning system in place, the villagers will at least be prepared if disaster strikes again in the summer months. They might not be able to change their fate, but they can certainly manage how they deal with it.

This story appears courtesy of Panos London, an organisation that promotes the participation of poor and marginalised people in national and international development debates through media and communication projects. They are part of the worldwide Panos Network of independent institutes working to ensure that people in developing countries have access to the information they need to improve their lives.

Preparing for Glacier Disaster in Pakistan by Rina Saeed Khan is licensed under a Creative Commons Attribution-NonCommercial-ShareAlike 3.0 Unported License.

Rina Saeed Khan is a Lahore-based freelance journalist, specialising in the environment and development issues. She began her career in journalism in 1992 when she joined The Friday Times, Pakistan’s first independent English weekly newspaper, where she served as Features Editor until 1998. Rina writes a weekly column on the environment called Earthly Matters for Dawn, Pakistan’s largest circulation English-language national daily.