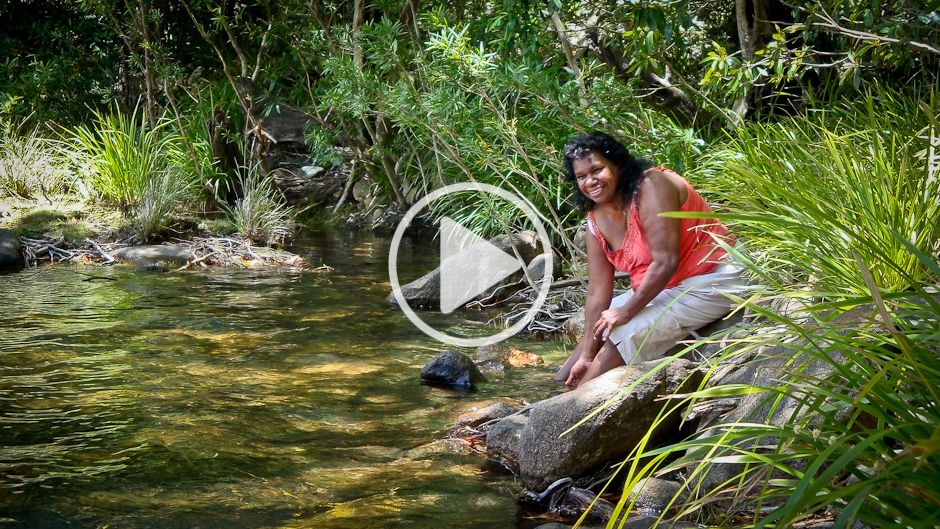 Located on the eastern shore of Australia’s tropical north, Shipton’s Flat is home to Marilyn, a Kuku Nyungkal Aboriginal woman, and her family.

She has been living here the ancestral way — far removed from the services and conveniences of modern life.

Like her ancestors before her, Marilyn walks through the Nyungkal bubu, the Nyungkal’s country, acknowledging and conversing with the spirit beings around her.

A change in the weather

Marilyn has observed that the seasons are getting hotter.  The rising temperatures are stifling the symphony of life in the Nyungkal bubu — driving animals to higher altitudes and transforming previously flowing streams into quiet pools of stagnant water.

Marilyn feels that the “country is transforming, food is disappearing.  If animals continue to move further up the mountain, they will disappear into the sky.”

The changes that she senses may be a result of what scientists term global warming, which is the increase in the average temperature of the Earth’s air and ocean since the mid-twentieth century.

What does it mean?

An increase in global temperatures is expected to lead to broader changes, including global sea level rise, variations in precipitation that may result in flooding and drought, increased frequency of extreme weather events, and loss of biodiversity.

For the Australian wet tropics, like Shipton’s Flat, a warming of 4.5°C would lead to the loss of approximately 65% of all endemic vertebrate species (see State of the Wet Tropics Report 2007-2008 from the Wet Tropcis Management Authority)

“There will be nothing left because it is getting hotter,” Marilyn worries. If the temperature continues to rise, it will slowly melt away the sounds and movements of the natural symphony and spirits around her.

Global warming is not the only threat to Shipton’s flat.  Not long ago, a mine and a dam were built near Marilyn’s home.  The trees around the artificial lake are slowly dying and Marilyn struggles to keep the animals and birds “from drinking the bad water.”

What should we do?

As Marilyn walks away from the artificial lake, she expresses a deep sadness for the destruction of the land.

Our human quest for advancement, development and improvement has obscured our senses to the harmony of nature.

The environmental changes in the new millennia challenge us to elucidate our perception so that, like Marilyn and other Aboriginal cultures, we can learn to listen to and respect the movements, colours, and sounds that make up the symphony of life.

Walking on country with spirits by Ameyali Ramos Castillo is licensed under a Creative Commons Attribution-NonCommercial-ShareAlike 3.0 Unported License.
Based on a work at http://ourworld.unu.edu/en/walking-on-country-with-spirits/.

Ameyali Ramos Castillo is an Adjunct Research Fellow working on the Water Management and Climate Programmes at the UNU-IAS Traditional Knowledge Initiative. Her work focuses on exploring interlinkages between global environmental issues and Indigenous Knowledge systems and on highlighting the role that Traditional Knowledge plays in developing sustainable solutions to pressing global environmental challenges. Before joining the TKI, Ameyali was a consultant and a PhD Fellow on the Science Policy for Development Programme at the UNU-IAS.