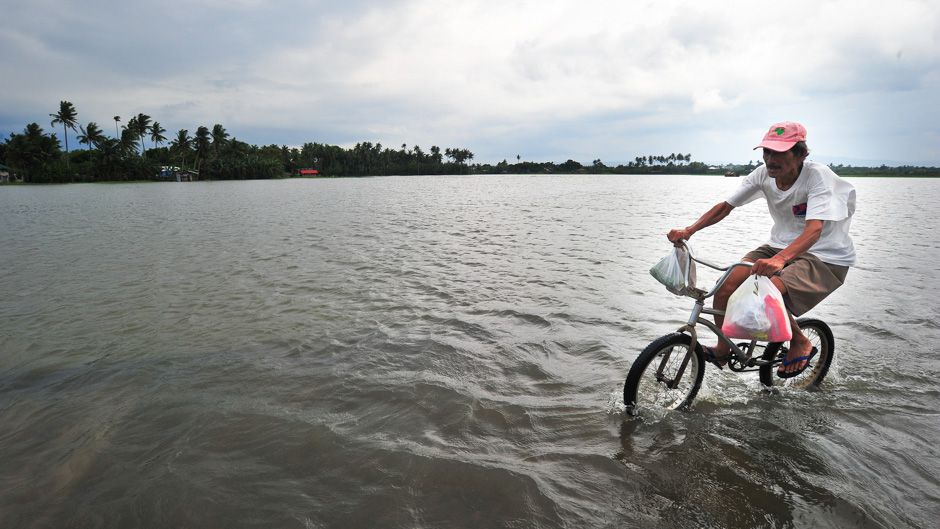 When in September the Arctic sea ice that freezes and melts each year shrank to its lowest extent ever recorded and then contracted a further 500,000 sq km, the small world of ice scientists was shocked. This was unprecedented, yet there was nothing unusual about the meteorological conditions in the Arctic in 2012, no vast storms to break up the ice, or heatwave to hasten the retreat. Only widespread warming of the atmosphere could have been responsible for less ice growth during the winter and more ice melt during the summer, the scientists concluded.It was, said the World Meteorological Organisation (WMO), just one of dozens of major physical events in 2012 that convinced many people that the extremes have become normal.

The most dramatic event was possibly hurricane Sandy, which swept through the Caribbean and up the east coast of the United States (US), leaving hundreds dead and thousands without power or shelter. But just a few weeks later it was possibly surpassed in strength by super-typhoon Bopha, which roared across Mindanao in the Philippines killing at least 900 people and leaving hundreds of thousands of people displaced.

Typhoons aren’t unusual in the Philippines or the US, but both of these were well outside their normal timescale and location.

Officially, said the WMO, the first 10 months of 2012 were the ninth-warmest since records began in the mid-19th century, with early months cooled by a La Niña weather event in the Pacific. In addition, 2012 broke the record for carbon dioxide concentration in the atmosphere.

Governments saw records tumble almost every season. According to NASA, it’s now been 28 years since the globe experienced temperatures cooler than the 1951–1980 average. Globally, 10 of the 11 hottest years have now been in the last 11 years.

The US was on course to experience by far its hottest year on record. Nearly 15,000 new daily heat records were set and Europe had its warmest spring ever recorded.

Former US vice-president Al Gore backed this up: “Every night on the news now, practically, is like a nature hike through the Book of Revelation.”

“Far-reaching changes [are] taking place on Earth’s oceans and biosphere. Climate change is taking place before our eyes and will continue to do so as a result of the concentrations of greenhouse gases in the atmosphere, which have risen constantly and again reached new records,” said Michel Jarraud, head of the Geneva-based WMO.

“Natural cooling events such as La Niña do not alter the underlying long-term trend of rising temperatures due to climate change as a result of human activities,” he added.

But the climate sceptics hit back, saying hysteria was fuelling fears of nonexistent manmade climate change. “The promoters … have essentially declared that manmade climate change will cause many bad weather events to happen. And since bad weather events always happen, there is no shortage of ‘proof’ of their predictions,” said Marc Morano of Climate Depot.

“They can always claim every bad weather event as evidence of their correctness. There is no way anyone can falsify the global warming claims now because any weather event that happens ‘proves’ their case, despite the fact that the current weather is neither historically unprecedented, nor unusual,” he added.

Nevertheless, the US government’s official drought monitor showed nearly two-thirds of the continental US (65.5 percent) to be in unprecedented “moderate to exceptional drought” by 25 September. Severe drought conditions hit Russia and Siberia during June and July.

In China, Yunnan and south-western Sichuan provinces experienced severe drought during winter and spring. Northern Brazil witnessed the worst drought in 50 years and the April–October precipitation total in Australia was 31 percent below normal.

Many parts of western Africa and the Sahel, including Niger and Chad, suffered serious flooding between July and September because of a very active monsoon. Exceptional floods hit Nigeria and parts of southern China experienced their heaviest rainfall in the last 32 years. Devastating monsoon floods hit Pakistan during September.

Only the number of cyclones worldwide was around normal. But, said the WMO, there was some evidence that they were more intense.

The Role of Climate Protection in Reconciliation