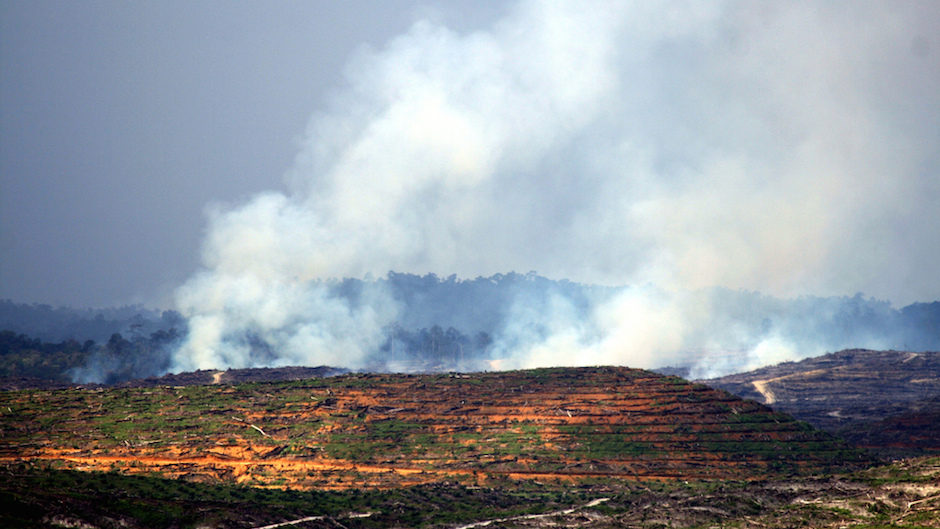 We can mark national boundaries with walls of concrete and rolls of barbed wire, but unseen CO2 emissions are released into a border-less atmosphere. Right now humanity is on track to triple these emissions by 2100 — precisely in line with Intergovernmental Panel on Climate Change’s (IPCC) worst-case emissions scenario. This will take us all into climatic territory no human has gone before.

Indeed, when it comes to the global concentration of carbon dioxide in the atmosphere, we blew past 400 parts per million last year without so much as a blink. When we reach 1000 ppm we will be at the CO2 levels of 50 million years ago. The planet is thought to have been 10 degrees Celsius hotter then, with sea levels approximately 60 meters higher than today. Of course we were not here then to enjoy the excessive sultriness of it all.

We’ve been around for 200,000 odd years. A team of scientists from the United States and the United Kingdom warn that humanity’s only experience with extreme temperature increase (4-5 degrees) was after the last ice age 18,000 years ago — and that heating up period took thousands of years. Can our grandchildren and great grandchildren handle planetary heating that’s 10 times faster?

The 2003 heatwave in Europe — which killed 35,000 people — saw summer temperatures in parts of France that were 10 degrees Celsius (18 degrees Fahrenheit) hotter than those of summer 2001.

I do not want to scare anyone, but….

When leading climate scientist James Hansen, former head of NASA’s Goddard Institute, stresses de-carbonization of energy by 2030 or certain climate catastrophe, I think mitigating emissions immediately would be the next rational next step to take. Just in case this very smart climate guy is right.

But as invisible greenhouse gases rise so does the very visible conflict that swirls around them. In 2007 California Governor Arnold Schwarzenegger took his fight against climate forcing greenhouse gases (GHG) all the way to the Supreme Court, where he sued the Bush Administration to waive federal regulations so that California could enact bigger-muscled emissions laws.

Assembly Bill 32 mandates California to cut GHG to 80 percent below 1990 levels by 2050 (the suggested IPCC mitigation target to remain within 450 ppm of CO2). The state is on schedule to have 33 percent renewable energy sources by 2020.

California runs a tight cap and trade program that, unlike the EU’s faltering Emissions Trading Systems, works quite nicely. Regulating emissions from big industry and the energy sector, next year the program expands to include natural gas and transportation fuel. The Los Angles Department of Water and Power reports a 22 percent emissions drop already — in part by having more renewable energy and less coal on the books, but also because fines for going over emissions caps are steep.

But while California aggressively curbs its own emissions, it has no jurisdiction on nations upwind, such as China. Nor on whom China does business with. The US Environmental Protection Agency (EPA) estimates some days 25 percent of the particulate matter in Los Angeles skies originates from Chinese coal-fired power plants. Some of the dirtiest fuel currently being burned in those power plants is petcoke, originating from the US.

The EPA now limits the domestic burning of petcoke fuel. But this ruling, which has helped lower overall US CO2 emissions, effectively just outsources the emitting location. But it doesn’t matter whether you send it right next door or across the Pacific to be burnt, the atmosphere is an all-encompassing amorphous receptacle.

California’s unilateral mitigation is a bold step in the right direction. A challenge to the rest of the US. But the North American continent seems to have ever-increasing supplies of high carbon fuels, think tar sands and petcoke, with an oil industry determined to extract them. Not surprisingly mitigation is becoming a divisive high-stakes battle.
Last week US President Barack Obama vowed to lower emissions from US coal-fired plants 30 percent below 2005 levels by 2030. His initiative is an executive order that sidesteps the necessity of congressional approval and perhaps prolonged partisan haggling. While to some minds he did not go far enough in limiting his nation’s CO2 emissions, it is believed this move will bring the world’s biggest greenhouse gas polluter, China, to the mitigation-negotiating table in Germany this week.

The IPCC’s March report reiterated the risks involved without immediate reduction of CO2. The same day oil giant Exxon Mobile came out with its own ‘carbon risk’ assessment. The company assured stockholders, “We are confident that none of our hydrocarbons are now or will become ‘stranded’.” Meaning they will be able to extract all the oil and natural gas they want. The company boasted government restrictions were “highly unlikely” to stop Exxon Mobile from oil business-as-usual.

The European Union is also mitigating CO2, with a big push on the continent for biofuels. A popular biofuel comes from palm oil. But the EU reducing carbon output via palm oil is yet another emissions out-sourcing operation. In 1997 Indonesia had the third highest carbon emissions (after the US and China) because of the burning of forests and peat lands. Much of this deforestation is driven by demand for palm oil production.

But after burning forest or peat land to grow palm, the biofuel produced is anything but low-carbon. Burning peat land fire releases 18-28 times more emissions than forest conversion, meaning that the biofuels created have a very high net carbon balance. Research shows that any biofuel or biodiesel produced on converted land initially emits more greenhouse gases than it mitigates.

The EU maintains that it is committed to sustainable palm oil production and monitoring systems are in place. However, these do not appear to be working, as evidenced by the smoky haze that plagues both Indonesia and its neighbours. Singapore recorded its highest air pollution in 2013 because of peat land fires lit in an area that was supposedly protected by a government moratorium on land conversion.

And it looks as though the problem is only going to get worse. Approximately 9 million hectares are under cultivation now and the area will grow another 4 million hectares between 2016– 2025, according to government figures.

Environmental organizations see an even bleaker picture — one in which, if current demand levels hold, palm oil production could cover 26 million hectares by 2025.

Indonesia has 11 percent of the world’s remaining tropical rainforest. This forest is a valuable terrestrial carbon sink and also home to incredible endemic biodiversity. Not to mention the indigenous people who are being displaced and marginalized by deforestation — incidences of which have been reported on Our World.

The mathematics of palm oil biofuel grown on converted land do not make sense. Added to that is the reality that reducing one’s own emissions at the expense of others defeats the purpose on many social justice and environmental levels.

While some mitigation efforts work and others falter, CO2, methane and nitrous oxide levels go up. Up into an atmosphere that once floated like a big security blanket around our planet. It once let just the right amount of heat in and out. But it can no longer effectively let all the heat out. We have unwittingly and collectively trashed our security blanket.

Mitigation can — and should be — enacted on local, state, national and international levels. The best news that could come out of President Obama’s recent announcement would be the beginning of serious international mitigation. The sooner controlling run away emissions is a coordinated multilateral effort, the more sense it will make.

We need to get serious about the reality of our shared geography. That we are one people, under one atmosphere.

Emissions Without Borders: The Problematic Geography of Mitigation by Belinda Waymouth is licensed under a Creative Commons Attribution-NonCommercial-ShareAlike 4.0 International License.