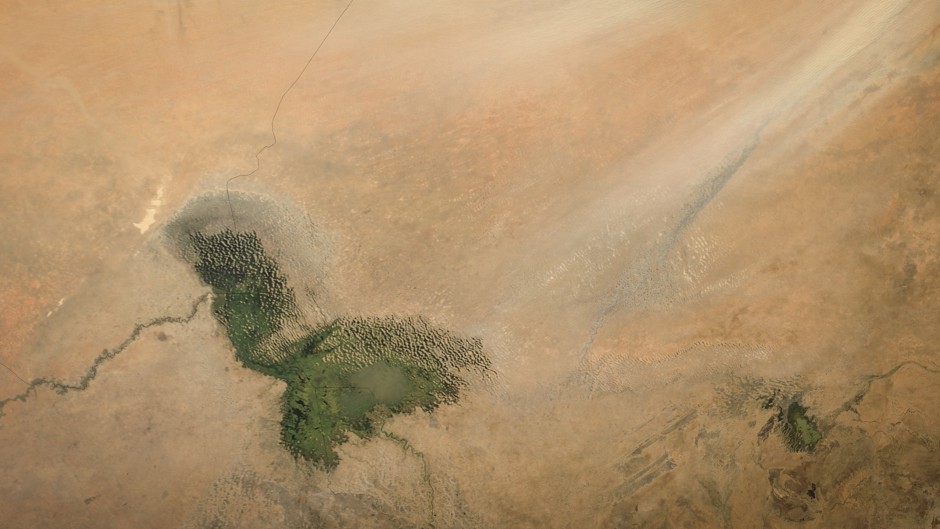 Lake Chad has literally gone from being an oasis in the desert, to being just desert. Spanning the countries of Chad, Nigeria, Niger and Cameroon and bordering the Sahara desert, Lake Chad has contracted by a massive 95% between 1963 and 2001.

Some stunning satellite images from NASA and compelling time-series video from Circle of Blue demonstrate the rapid decline of what was formerly the world’s 6th largest lake.

According to the United Nations Environment Programme (UNEP), about half of the shrinkage of the traditionally shallow Lake Chad has been caused by climatic changes, and the other half by high demand for agricultural water. 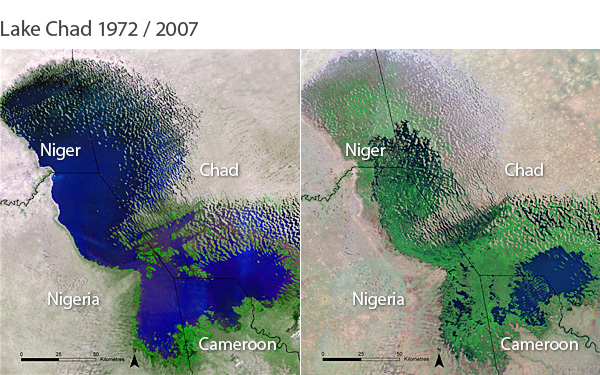 Poor human management through overgrazing and unsustainable irrigation has resulted in the replacement of natural vegetation with invasive plant species (now covering 50% of the lake), deforestation and the drying of the climate.

It is critical that global environmental discussions integrate climatic and conflict challenges in developing countries. The Intergovernmental Panel and Climate Change (IPCC) Fourth Assessment Report on “Impacts, Adaptation and Vulnerability” identifies the links between climate change and conflict, including in its Africa chapter.

In fact, as early as 1991, Thomas Homer-Dixon (and other peace and conflict experts) predicted future links between climate change and conflict in places like Lake Chad:

“Future wars and civil violence will often arise from scarcities of resources such as water, forests, fish…” (from On the Threshold: Environmental Changes as Causes of Acute Conflict.)

Water, the lifeblood of Lake Chad’s 20 million beneficiaries, can also be the potential lubricant for future conflict. Water scarcity, intensified by climate change, completes a conflict cocktail that includes surging populations, the spread of disease, oppression and corruption.

Sadly, across Africa, there are many declining shared water sources. The Zambezi River basin, which stretches across 8 countries in Southern Africa — Angola, Botswana, Malawi, Mozambique, Namibia, Zambia, Tanzania and Zimbabwe — has lost a significant portion of its fresh water due to pollution and poor management.

Variations in the size of the Okavango River, shared by Botswana and Namibia,  have already almost led to military confrontation between the two countries.

If you think that these problems are only surfacing in Africa, think again. A new movie — Blue Gold: World Water Wars — screened at the Environmental Film Festival in Washington DC to coincide with United Nations World Water Day on 22 March, highlights how freshwater stocks are drying up all over the world.

Not surprisingly, one of the aims of the 5th World Water Forum, held last week in Istanbul, Turkey, is to raise the profile of water on the political agenda. Only by first stimulating serious awareness amongst the general population can one of the forum’s other aims, generating political commitment, be achievable.

She describes the global water crises as a battle between multinational corporations and international institutions on one hand (including “parts of the UN” such as UNESCO), and a global water justice movement on the other.

For the former, water is an “economic good”, which some are exploiting as an increasingly profitable financial investment; for the latter, access to clean water is everybody’s human right, but not one that everybody enjoys.

However, the real crux of the problem around Lake Chad, or anywhere else, lies in this key contradiction. Free or cheap access to water has led to unsustainable use and permanent damage to water supplies. At the same time, pricing water according to the “market”, which in theory leads to more efficient use, has come at the expense of those who can least afford it. We found a thought provoking discussion about this on the Aguanomics Blog.

Clearly, the principles of both equity and efficiency need to be followed so that future generations will have water to drink.

Going against the tide of popular opinion, four researchers from the International Peace Research Institute in Oslo (PRIO) argue that the links between climate change and conflict have “rarely been substantiated with reliable evidence”.

Historically, in relation to cross-border water management, cooperation is more common than conflict. According to the UN, over the last 60 years, there have been 37 cases of reported violence between states over water, in comparison to over 200 international agreements. In fact, formerly hostile neighbors Botswana and Namibia have joined forces to share the Okavango.

Experts say that any answer lies in “better governance” at global, regional and local levels. The five member nations of the Lake Chad Basin Commission, the body that aims to regulate the use of the Basin’s remaining natural wealth, require more active support from international institutions like the UN.

In addition, all businesses operating in the area, whether multinational corporations or small-scale farmers, should be “green” and abide by the precautionary principle.

There is some hope that long term plans to divert abundant water from the nearby Congo river can replenish Lake Chad. In addition, yet-to-be-exploited underground aquifers can lead to a so-called “groundwater revolution”.

Yet, even if these lifelines were to materialize, the same mistakes relating to sustainable management could easily be made again. In the absence of local solutions to address extreme poverty in the region, top-down approaches will not succeed.

At current rates of decline, communities whose basic livelihoods are threatened will have no choice but to move beyond their traditional lands. Who could blame them?

There is still a chance that from a literal desert, an oasis of hope may spring. If not, Lake Chad, might be history — history worth learning from.

See the Blue Gold: Word Water Wars website for details of screenings in your country.