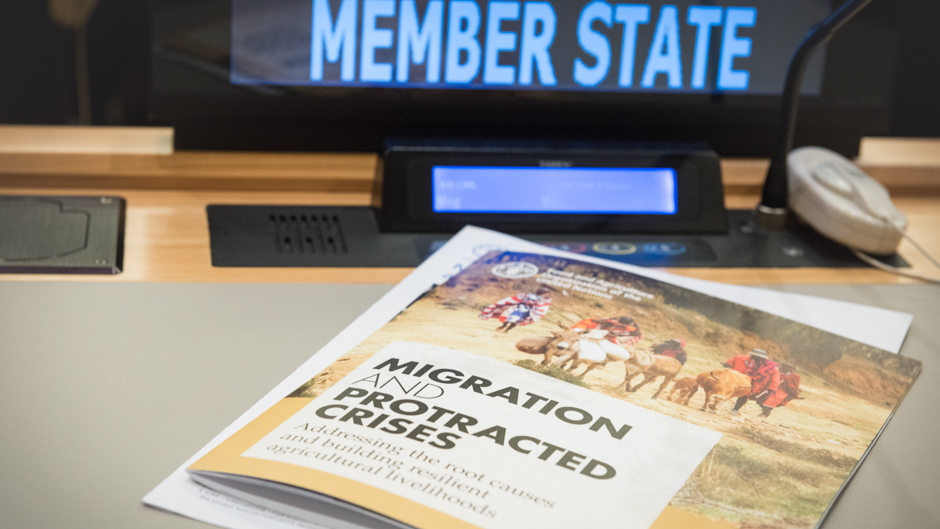 In recent years, the world has seen a rise in the number of people displaced due to violence, conflict, environmental degradation, and economic hardship. These demographic shifts have re-focused interest and debate on the large-scale movement of refugees and migrants. This is the third instalment in a series of information briefs that aim to provide an overview of recent developments in the area of international migration.

World leaders recently met for the UN Summit for Refugees and Migrants and the US-hosted Leaders’ Summit on the Global Refugee Crisis. The UN summit was significant as the first summit of heads of state and government to be called by the UN General Assembly to address issues around the large movements of refugees and migrants. By pledging new commitments to address these large movements, the summits are encouraging indicators that the world is beginning to develop a more unified response to the refugee and migration crisis. Nonetheless, concerns have been raised about the extent of the commitments agreed to by states during the summits and that adequate responses appear to be lacking in many cases.

UN Summit for Refugees and Migrants

A number of commentators expressed scepticism that the 19 September UN Summit for Refugees and Migrants would culminate in concrete action. Mechanisms set forth in the New York Declaration, such as the Comprehensive Refugee Response Framework — a framework for crafting global responses to specific refugee crises — were criticised for reiterating UNHCR’s current best practices and failing to create new mechanisms to address the crisis at hand. The Refugee Solidarity Network highlighted concerns that the declaration did not create binding obligations on states.

The UN High Commissioner for Refugees Fillipo Grandi disagreed with criticism that the declaration lacked concrete commitments. Grandi noted that the New York Declaration helps create a more favourable and predictable climate for responding to the refugee crisis. He noted that the declaration helps expand the scope of activities for refugee response to include concerns such as education and jobs, which are often missing in humanitarian assistance programmes. Proponents of the declaration underscore that it creates a more unified commitment to responding to the large movements of refugees and migrants. The successful negotiation of a declaration can also be the first step in the creation of legally binding commitments later down the line.

Discussion at the summit, including two roundtable sessions, focused primarily on identifying and mitigating the root causes of large movements of refugees and migrants. The reasons and motives for fleeing a country or migrating elsewhere quickly became a recurring theme. The protection of refugees and migrants in transit, regular and predictable funding of humanitarian programmes, and the benefits and opportunities of safe, orderly, and regular migration, also received considerable attention at the summit.

Responsibility sharing featured prominently at the UN Summit, although neither the Declaration nor the concept notes actively explored the implementation of a framework for effective responsibility sharing. Unsurprisingly, responsibility sharing continues to be the source of considerable controversy in Europe, which has frequently been criticised for not adequately responding to the sudden influx of refugees and migrants in recent years. Although EU nations voted in September 2015 to share relocation of 160,000 refugees over two years, only around 5,000 refugees have been relocated so far. Greece’s prime minister Alex Tsipras recently called on European partners to uphold their obligations under an EU plan agreed last year and accelerate the relocation of asylum-seekers from Greece.

European disagreement about the refugee crisis is reflected more broadly through public opinion. A recent article by the Pew Research Center shows that a median of 59% of those surveyed were concerned that hosting refugees would increase the risk of terrorism, while a median of 50% believed that refugees are a burden to society. The refugee crisis worries many people across Europe, but not equally. A majority of individuals in Poland, Hungary, Greece, and Italy appear to worry about the crisis, compared to only about a third of individuals in Germany and Sweden.

Although European response to the crisis appears to be fragmented, at the 19 September summit Jordan, Lebanon, and Turkey advocated for a stronger and more united response to the large movement of refugees from Syria. Jordan, Lebanon, and Turkey jointly co-hosted, along with Kenya, Fiji, and Canada, a roundtable discussion exploring future international action and cooperation on refugees and migrants. Jordan has been an especially prominent participant and primary sponsor during the drafting process of the New York Declaration, as well as hosting one of the roundtable discussions and being an active participant at the Leaders’ Summit on 20 September.

Although the outcome of the 19 September summit was relatively well-known, little was known beforehand about the 20 September Leaders’ Summit on the Global Refugee Crisis, besides commitments to increase humanitarian funding for refugee operations and the number of refugees being resettled.

In addition to co-hosting the Leaders’ Summit, the Obama administration has increased its resettlement efforts for refugees over the past year. The administration recently reached its goal of resettling 10,000 Syrian refugees. The White House has also pledged to accept 110,000 refugees during the 2017 fiscal year, an increase of 29 per cent from 85,000 this past fiscal year.

Although many have applauded the Obama administration’s efforts, it is unclear whether the incoming US administration will uphold these commitments. Although Democratic presidential candidate Hillary Clinton has in the past indicated a willingness to accept 65,000 refugees from Syria, Republican presidential candidate Donald Trump has made controversial promises that would severely limit immigration to the United States.

Noteworthy was Australia’s attendance at the 20 September Leaders’ Summit amid growing controversy over alleged abuse at its offshore immigration detention facility on the island nation of Nauru. Despite concerns surrounding its immigration policies, at the Leaders’ Summit Australia committed additional funding, an increase of approximately US$99 million over three years, to support countries and communities hosting refugees. Further commitments include dedicating a minimum number of places over three years to displaced people from specific protracted refugee situations; and participating in a US-led programme to resettle refugees from Central America.

In parallel to the summits led by the UN on 19 September and the US on 20 September, Concordia, a non-profit and non-partisan organisation that enables public-private partnerships, hosted the Private Sector Forum on Migration and Refugees. The forum focused on the private sector’s role in addressing global migration and refugee challenges. The forum coincided with investor George Soros earmarking close to US$500 million to help refugees.