If there is one thing I know, it’s that the 1% loves a crisis. When people are panicked and desperate, that is the ideal time to push through their wishlist of pro-corporate policies: privatising education and social security, slashing public services, getting rid of the last constraints on corporate power. Amidst the economic crisis, this is happening the world over.

There is only one thing that can block this tactic, and fortunately, it’s a very big thing: the 99%. And that 99% is taking to the streets from Madison to Madrid to say: “No. We will not pay for your crisis.”

That slogan began in Italy in 2008. It ricocheted to Greece and France and Ireland and finally it has made its way to the square mile where the crisis began.

Many people have drawn parallels between Occupy Wall Street and the so-called anti-globalisation protests that came to world attention in Seattle in 1999. That was the last time a global, youth-led, decentralised movement took direct aim at corporate power. And I am proud to have been part of what we called “the movement of movements”.

But there are important differences too. We chose summits as our targets: the World Trade Organisation, the IMF, the G8. Summits are transient, they only last a week. That made us transient too. And in the frenzy of hyper-patriotism and militarism that followed 9/11, it was easy to sweep us away completely, at least in North America.

Occupy Wall Street, on the other hand, has chosen a fixed target. And no end date. This is wise. Only when you stay put can you grow roots. This is crucial. It is a fact of the information age that too many movements spring up like beautiful flowers but quickly die off. It’s because they don’t have roots. And they don’t have long term plans for how they are going to sustain themselves. So when storms come, they get washed away.

[quote quote=”It seems as if there aren’t any more rich countries. Just a whole lot of rich people. People who got rich looting the public wealth and exhausting natural resources around the world.” author=”Naomi Klein” type=”image” image=”3944″ ] 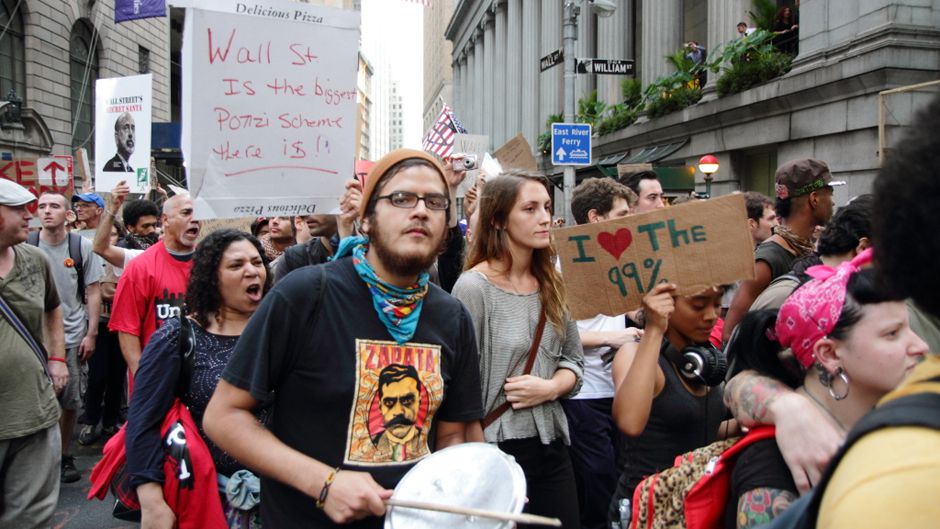 Being horizontal and deeply democratic is wonderful. These principles are compatible with the hard work of building structures and institutions that are sturdy enough to weather the storms ahead. I have great faith that this will happen.

Something else this movement is doing right: You have committed yourselves to non-violence. You have refused to give the media the images of broken windows and street fights it craves so desperately. And that tremendous discipline has meant that, again and again, the story has been the disgraceful and unprovoked police brutality.

But the biggest difference a decade makes is that in 1999, we were taking on capitalism at the peak of a frenzied economic boom. Unemployment was low, stock portfolios were bulging. The media were drunk on easy money. It was all about start-ups, not shut-downs.

Ten years later, it seems as if there aren’t any more rich countries. Just a whole lot of rich people. People who got rich looting the public wealth and exhausting natural resources around the world.

The point is, today everyone can see that the system is deeply unjust and careening out of control. Unfettered greed has trashed the global economy. And we are trashing the natural world. We are overfishing our oceans, polluting our water with fracking and deepwater drilling, turning to the dirtiest forms of energy on the planet, like the Alberta tar sands. The atmosphere can’t absorb the amount of carbon we are putting into it, creating dangerous warming. The new normal is serial disasters: economic and ecological.

These are the facts on the ground. They are so blatant, so obvious, that it is a lot easier to connect with the public than it was in 1999, and to build the movement quickly.

The task of our time is to turn this round: to challenge this false scarcity. To insist that we can afford to build a decent, inclusive society – while at the same time respect the real limits to what the earth can take.

What climate change means is that we have to do this on a deadline. This time our movement cannot get distracted, divided, burned out or swept away by events. This time we have to succeed. And I’m not talking about regulating the banks and increasing taxes on the rich, though that’s important.

I am talking about changing the underlying values that govern our society. That is hard to fit into a single media-friendly demand, and it’s also hard to figure out how to do it. But it is no less urgent for being difficult.That is what I see happening in this square. In the way you are feeding each other, keeping each other warm, sharing information freely and providing health care, meditation classes and empowerment training. My favorite sign here says “I care about you”. In a culture that trains people to avoid each other’s gaze, to say “Let them die,” that is a deeply radical statement.

We have picked a fight with the most powerful economic and political forces on the planet. That’s frightening. And as this movement grows from strength to strength, it will get more frightening. Always be aware that there will be a temptation to shift to smaller targets – like, say, the person next to you. Don’t give into the temptation. This time, let’s treat each other as if we plan to work side by side in struggle for many, many years to come. Because the task before us will demand nothing less.

Let’s treat this beautiful movement as if it is the most important thing in the world. Because it is. It really is.

This article was originally published on guardian.co.uk on Friday 7 October 2011. The article is a version of a speech delivered on Thursday 6 October 2011 that first appeared in print in the Occupied Wall Street Journal

Naomi Klein is the award-winning author of the international bestseller, No Logo: Taking Aim at the Brand Bullies. Translated into 28 languages and with more than a million copies in print, The New York Times called No Logo “a movement bible.” She writes an internationally syndicated column for The Nation magazine and the Guardian newspaper. Her articles have appeared in Harper’s Magazine, The Globe and Mail, and The New York Times. A collection of her work, Fences and Windows: Dispatches from the Front Lines of the Globalization Debate, was published in 2002. In 2004 she wrote and co-produced “The Take,” an award-winning documentary about Argentina’s occupied factory movement. She is a former Miliband Fellow at the London School of Economics and holds an honorary Doctor of Civil Laws from the University of King’s College, Nova Scotia. Her book The Shock Doctrine: The Rise of Disaster Capitalism was published worldwide in 2007.