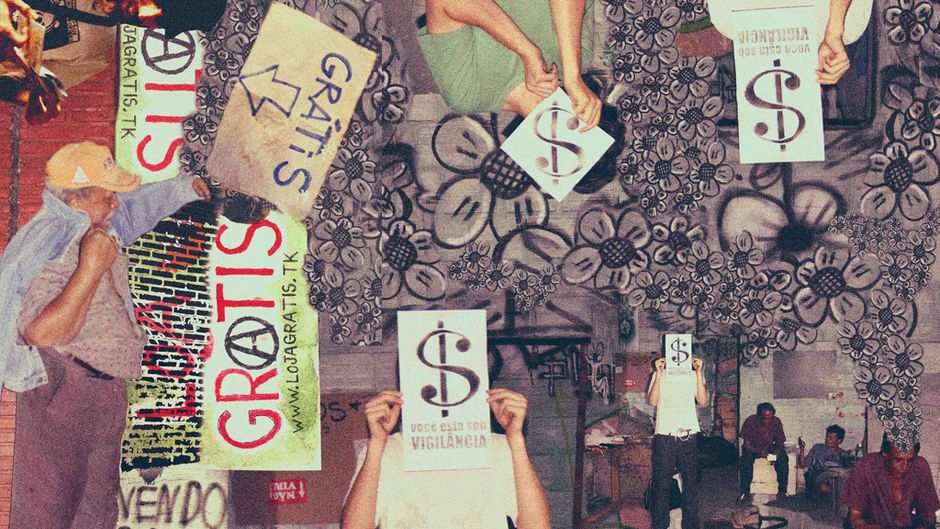 We’re told to take what we want from the tight racks of used clothes, kitchen supplies, and books in this second-hand shop in the Freidrichshain neighborhood of Berlin. We don’t have to pay. We aren’t stealing. We don’t have to exchange anything in return.

Instead, we are participating in a component of the solidarity economy at the Schenkladen, a gift shop where everything is free. The free store is part of a platform called Systemfehler (meaning “system error”, or society mistake) — which provides a space for multiple political projects — and is one of four free stores in Berlin, located inside one of the many “housing projects”, elsewhere known as communal or collective living.

Free stores subvert the entire premise of what people understand as a store, transforming it into a place of cooperative sharing.

The concept is simple: people donate stuff they don’t need and people who need the stuff take it. The free store is not a charity but rather a preventative practice. Charity becomes a benevolent band-aid to capitalism’s downtrodden; instead, the free store works as an alternative economic system based on mutual aid.

“People — they’re not used to doing stuff without money or without [exchanging],” says Ellen Sati, who volunteers at the store on Jessnerstrasse and other Systemfehler projects, as we sit around a dimly lit coffee table in the space. “It’s something that’s not so presented in society… that there’s not really money involved.”

Free stores subvert the entire premise of what people understand as a store, transforming it into a place of cooperative sharing. They don’t want people to have to buy and sell stuff , and they especially don’t want items to sit at home untouched. The general guideline is that each person shouldn’t take more than five things, but the very concept of taking something without anything in return can be strange at first, Ellen observes.

“Some people are a bit not at ease when they just take something, and they ask, ‘Is it fine?’ and, ‘Yeah, of course,’” she explains. Around her, volunteers prepare a soup dinner before this evening’s free entertainment, a clown performance.

Fighting for a new economy

Through the free store, Ellen and the other volunteers fight for an economy that’s “not so much based on money and on getting things in return, but more on people, interaction, creativity, and [the] energy people put into [projects].”

Imagine if you could navigate the world not based on how much you worked and what your earnings give you access to, but through supportive economic interactions based on cooperation. Though these types of economic interactions are largely written off by Western economics, they happen constantly on a smaller scale in communities, neighbourhoods, and certain cultures. The problem for capitalism: cooperation can’t be measured in economic profit. Capitalism suffers from cooperation (for example, communal living) because when people share resources, the need for production and consumption decline.

“It’s not like capitalism, so against the people with the elbows,” David Vogel says from the other corner of the table, sitting on a sofa up against the window. Rather than it being about competing as an individual for a career, a solidarity economy structure encourages collaboration. Systemfehler’s horizontal organizational structure reflects the volunteers’ belief that cooperation transcends competition. The store has monthly meetings where decisions and problem solving happen based off unanimous consensus.

Capitalism suffers from cooperation (for example, communal living) because when people share resources, the need for production and consumption decline.

“We always try to find a solution that fits everybody, which takes more energy and time sometimes, but it’s more I think it’s better,” she says.

Although critics may argue the process is too painstaking, David says that in his experience, in the long-term, the unanimous consensus process is ultimately more “sustainable.”

“Another concept of our group is good feeling,” he continues. The seemingly simple concept of how the economic interactions of our lives make us feel is a concept completely alien when success is measured in money and profits. Instead of credit card cold transactions, people leave the free store with the feeling that they participated in a cooperative project.

“We don’t do it to work here… it’s also about fun and being together and doing this together,” says Ellen.

Systemfehler was founded in 2007 at a different location on Scharnweberstrasse. The original free store was evicted due to problems with the house owner, but rather than allow the police to just throw them out, the free store volunteers turned the eviction into a demonstration walkout to foil the police force.

“It was very funny because the police opened the doors of the shop [and] there were a lot of colored balloons coming to them,” he says, explaining that they packed the store with balloons and then marched to the new location carrying all the free shop items, an over-escorted moving day.

There are costs to running the Systemfelher space, however, mainly rent. The volunteers pay their costs through monthly donations from people in different forms, as well as being a solidarity partner for non-commercial festivals and info stands at events in the city.

The free shop is the most well-known project using the space, but Systemfehler also hosts Café maschinen(t)raum, which runs various cultural evenings, including concerts,a theatre, and a bar. Systemfehler also hosts a Volksküche night, or people’s kitchen, where the volunteers cook for lots of people for minimal cost, as well as nights for anarchistic ecological films and meditation.

On this particular Wednesday night dinner is almost ready. A visiting Israeli volunteer warns us in warm-hearted tones that we may want more salt with our soup. The three volunteers share the life circumstances and ideals that got them involved with the project. Ellen and David discuss the division between the rich and the poor exacerbated by capitalism and the need for grassroots movement building.

“So I think we need little steps, and slowly – perhaps not too slowly – but not too fast, otherwise we will have the same system in another way, or with other leaders,” David says. “But I think we have to smash the hierarchy structure. For me [the free store is] also a part of this process.”

Although curbside free boxes have become a fixture in the activist community, the free store subsumes the identity of a well-organized storefront into a community project based on horizontal organizing, good feeling and cooperative sharing.

If more cooperative projects were to take over typically capitalist places like stores and restaurants, perhaps people would be able to envision a world held together by collective sharing, instead of alienating exchange.

Ellen looks up at us with a laugh and asks, “[You] want a revolution, yeah?”

Berlin’s ‘System Error’ Free Shop by Andrea Abi-Karam and Taylor Miles is licensed under a Creative Commons Attribution-NonCommercial-ShareAlike 3.0 Unported License.
Based on a work at http://www.opendemocracy.net/transformation/andrea-abi-karam-taylor-miles/berlin%E2%80%99s-system-error-free-shop.

Andrea Abi-Karam is a Bay-Area based poet, activist and freelance journalist. She hosts a monthly political poetry open (no mic) night, Words of Resistance, in Oakland. She studied Neurobiology and English at Boston University where she served as Editor-in-Chief of BU’s independent online magazine The Quad for a year and a half.

Taylor Miles is a freelance journalist and English teacher living in Prague. She studied journalism and Latin American studies at Boston University and worked at various publications in the Boston area, including The Boston Globe city desk. She has done solidarity work in northeast Brazil with Ciclovida and against World Cup displacement with the Rooting for the Home Team campaign.