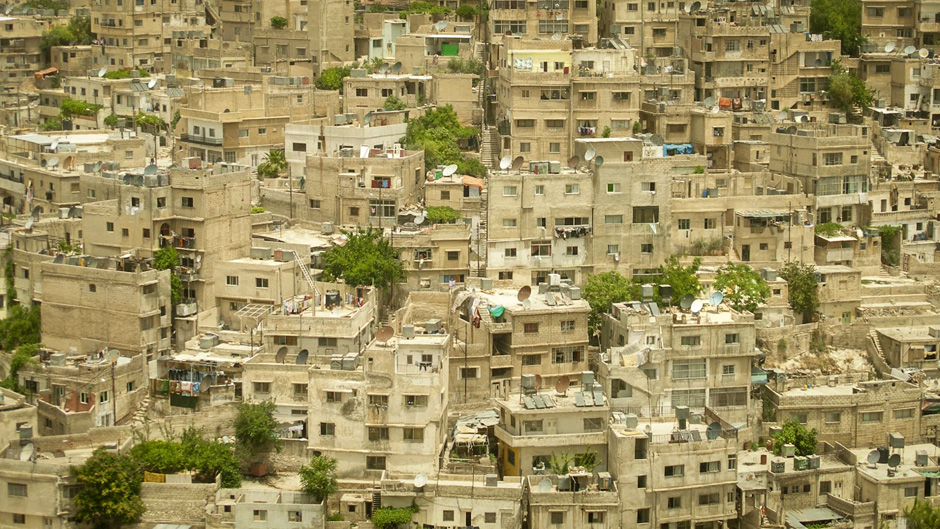 Flowers burst out of old tires and rows of pepper plants fill recycled plastic tubs as herbs pop out of old pipes. As utilitarian as it is cheery, this rooftop array is one of several urban agriculture projects that are significantly improving livelihoods for the urban poor in this sprawling city [Amman, Jordan].

A slowly but steadily growing phenomenon in Jordan, urban agriculture has vast potential for reducing poverty and improving food security, and it has the added benefit of greening and cleaning up more rundown sections of cities.

But the success of urban agriculture depends on key components that are increasingly difficult to secure: land and water. Space for planting is growing ever slimmer in Jordan, and the country suffers from a perpetual shortage of water. While such problems are major, they have also forced those involved in urban agriculture in Amman to devise innovative and efficient ways to work around them.

The more successful they are, the more valuable urban agriculture becomes in Jordan, where two-thirds of the 160,000 people who are food insecure live in cities and 13 percent of the population lives below the poverty line. For them, urban agriculture is not a complete solution, but it does alleviate poverty, and in the long term, its indirect benefits can be even more widespread.

Unchecked population growth and relatively unplanned development transformed Amman from a village in the 1940s to a vast, 1,000-square-kilometre metropolis in the 21st century. With a population of 2.3 million, the capital has 312 people per square kilometre, more than four times the national population density.

While willy-nilly urbanization has not created the most functional of cities, the resulting urban sprawl actually jibes quite nicely with the concept of urban agriculture — using empty spaces between houses and on windowsills, balconies, and roofs to plant vegetables, herbs and other plants that families can consume or sell to boost their income.

Amman started its official urban farming programme in 2006, according to Hesham al Omari, the engineer who heads the urban agriculture office at the Greater Amman Municipality (GAM), as part of an initiative by the Resource Centres on Urban Agriculture and Food Security (RUAF), an international network of resource centres.

Although gardening at home was not new in Jordan, GAM’s programme aimed at making it more widespread and efficient by helping people start gardens in their homes — even giving them the materials to do so — and holding trainings to teach them how to grow as much as possible at a minimal cost.

“We choose inexpensive materials for people,” Omari said. Trainings teach people how to reuse materials like metal tins, plastic bags, and old wood for planting. Early projects ranged from planting carob and olive trees in an impoverished area of East Amman to prevent desertification to teaching women in another district to raise drought-resistant and aromatic herbs. The office is currently holding trainings in schools and women’s organizations.

“Fruits and vegetables in the markets are expensive, so if people can produce these things in their home, it’ll save them money,” Omari noted. He estimated that there are at least 400 rooftops gardens in Amman, though he hopes to see that number someday surpass 1,000.

In Arab countries, which import the majority of their food and are expected to import even more in coming decades, food security is linked to food prices, which are steadily rising. As a result, urban agriculture is one way to improve food security, noted a paper for the International Centre for Advanced Mediterranean Agronomic Studies (CIHEAM).

“Although it is a longstanding practice, urban agriculture receives poor recognition from agricultural scientists, policymakers, researchers, and even its practitioners,” said the International Development Research Centre (IDRC), which funded research for the CIHEAM paper, pointing out how undervalued urban agriculture can be.

In the third most water-scarce country in the world, expending precious water on household plants may seem like a luxury Jordanians cannot afford. So GAM has also been teaching urban agriculturalists efficient water usage through grey water recycling systems, irrigation techniques, and rainwater catchment.

Khawla al-Amayra, who lives in the village of Iraq al-Amir on the western outskirts of Amman, where GAM held one of its training projects, said that a lack of water is the biggest challenge and that “in the summer, we have very little water.”

Land fragmentation and urbanization also significantly affect agriculture. In governorates where the drop in cultivated land has been most severe, including Amman, between 1975 and 2007 land for growing grains decreased by 65 percent and for vegetables 91 percent, according to research by the World Food Programme and the United Nations Development Programme.

Despite these challenges, the IDRC praised Amman, where “strong municipal support has encouraged development [of urban agriculture].” Furthermore, once participants have gone through the training with GAM, they spread their knowledge to neighbours and friends outside the programme, Omari said.

The success in Amman has paved the way for other cities to take up similar projects. Eighty-two percent of Jordan’s population is urban, which means the vast majority of the population could become involved in urban agriculture and reap the same benefits — extra income, better food security and access to fresh produce.

A final report from RUAF on one of the GAM projects it funded was optimistic about urban agriculture’s prospects not just in Amman but also throughout the rest of Jordan, noting that urban agriculture “has become an integral part of the agenda of the municipality” and that “legislation has become more UA [urban agriculture] friendly.”

Thanks to the municipality, it noted, urban agriculture has garnered support from higher levels of government. Last week, the Jordanian Ministry of Agriculture decided to start selling fruit saplings to the public at bargain prices, “to increase green spaces in Jordan, especially with crops and trees which are economically feasible,” said Nimer Haddadin, the Ministry’s spokesperson.

From Omari’s perspective, however, the government can’t do everything to spread urban agriculture, even as new projects have begun in Jerash, north of Amman, and Ain Al-Basha, northwest of the city. “They need help from the people,” he said with a smile.

Elizabeth Whitman is a freelance journalist based in Amman, Jordan covering politics, human rights, and other developments, including the Syrian refugee crisis. She has written for The Nation, Boston Review, Al Jazeera English, and others.