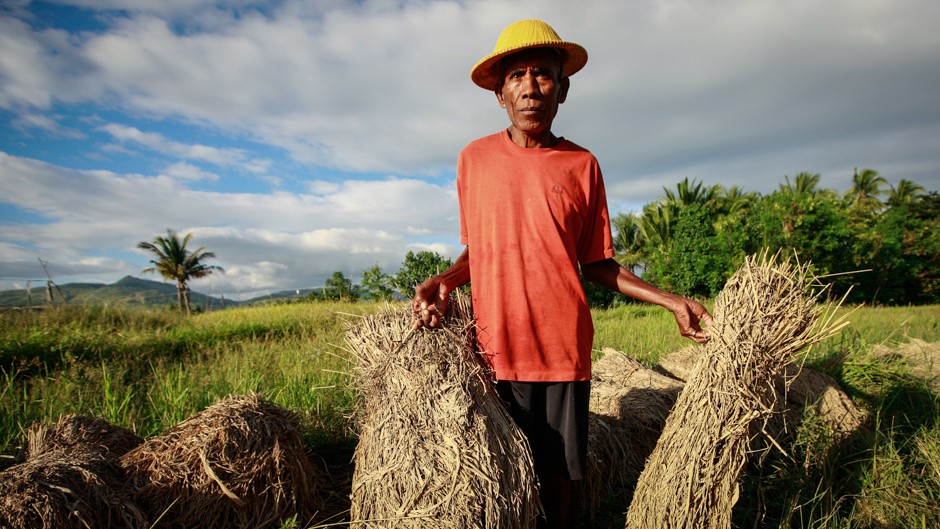 In case it wasn’t already clear, there is now consensus that climate change will have a significant impact on the world’s food systems. A leaked draft of the newest report from the United Nations Intergovernmental Panel on Climate Change (IPCC) underscored the serious threat climate change poses for meeting demand for food in the coming decades. The contents of the report — though not a revelation — should be a catalyst for a complete reassessment of the global food system.

Increasingly, it is not a question of if or when a changing climate will impact our food, but rather how farms and agricultural systems will choose to adapt.

In a warming world there will be bursts of heavy rain and prolonged drought that will, as the UN puts it, exacerbate water shortages and shift growing seasons. Some of the biggest impacts from climate change will be felt on farms, with the UN estimating that yields of staple crops such as corn, wheat and rice could be depressed by as much as 2 percent each decade for the rest of the century.

What all of this will actually mean for the world’s hungry though, and what we can do about it is another story entirely. As awareness about the impacts of climate change increases, the debate about how to achieve climate resiliency and feed the world intensifies.

Food sector emissions are largely the result of industrial livestock operations, fertiliser and chemical use, carbon loss from soils on industrial farms, and significantly, deforestation driven by a handful of corporate controlled commodities.

We believe we cannot have these conversations without first acknowledging the role the food system itself currently plays in the crisis. Today, almost every aspect of our modern food system generates greenhouse gas emissions; responsible for one third of the world’s total greenhouse gas emissions every year. Food sector emissions are largely the result of industrial livestock operations, fertiliser and chemical use, carbon loss from soils on industrial farms, and significantly, deforestation driven by a handful of corporate controlled commodities.

Indonesia is now the third largest greenhouse gas emitter in the world, just behind China and the US. This is partially as a result of clearing rainforests and peatlands to make way for industrial palm oil plantations — an ingredient now found in much of the packaged foods lining our supermarket shelves.

The climate solutions from agribusiness players — such as commodity and chemical giants Cargill, Wilmar and Monsanto — are worth questioning in light of the impact these corporations have on our climate. In their PR spin, these corporations suggest that we face key tradeoffs: either accept chemicals, engineered seeds, and synthetic fertilisers as well as expansion of cropland into forests — or face more hunger. Echoing this talking point in 2008, the chair of the board of agrochemical giant Syngenta said: “The world has to choose between technology, deforestation and hunger. I can’t see another way out.”

But this is a false tradeoff. Executives from the companies profiting from industrial agriculture may see little reason to stray from their current path, but in an increasingly resource-constrained and climate-unstable world we cannot support life unless we shift away from input-intensive agriculture that is degrading ecosystems, marginalising small farmers, and failing to eliminate hunger.

So what can we do? We can move quickly and confidently toward climate-friendly farming. Protecting forests, working with smallholder farmers and promoting climate-smart agriculture can address the roots of hunger and the climate crisis.

A global assessment by the UN special rapporteur on the right to food concludes: “… agroecology, if sufficiently supported, can double food production in entire regions within 10 years while mitigating climate change and alleviating rural poverty.”

Research has shown that by using agro-ecological methods, such as organic fertilisers, crop rotations, cover crops and ecological pest management, and focusing on improving the productivity of smallholder farmer communities that already feed one third of the world, we can maintain the health of farmlands. We can also promote increased resilience to climate change impacts and meet our food needs. A global assessment by the UN special rapporteur on the right to food concludes: “… agroecology, if sufficiently supported, can double food production in entire regions within 10 years while mitigating climate change and alleviating rural poverty.”

We need to start incentivising — through corporate agreements, consumer demand, and policy — an agricultural system that’s climate smart and pro-farmer, and at the same time reduce emissions from the industrial food sector as fast as we can.

That means protecting pristine forests from soy or palm oil plantations; reducing dependency on synthetic fertiliser and petroleum-based agrochemicals; working with smallholders to improve the productivity of traditional farming systems; and addressing the rampant waste along the food chain.

Today, an estimated one third of all food that could be eaten is wasted. In some countries such as the US as much as half is wasted. Just focusing on food waste reduction could feed three billion people and still leave enough surplus for countries to provide 130 percent of the nutritional requirements for their entire populations, according to food waste expert, Tristram Stuart.

As a warming climate increasingly affects the world’s farmers, agribusiness will continue to prey on fears of “not enough” to preserve their way of doing business. It’s time to pursue a different path.

Anna Lappé is the author of Diet for a Hot Planet: the climate crisis at the end of your fork and what you can do about it and a board member of Rainforest Action Network (RAN).