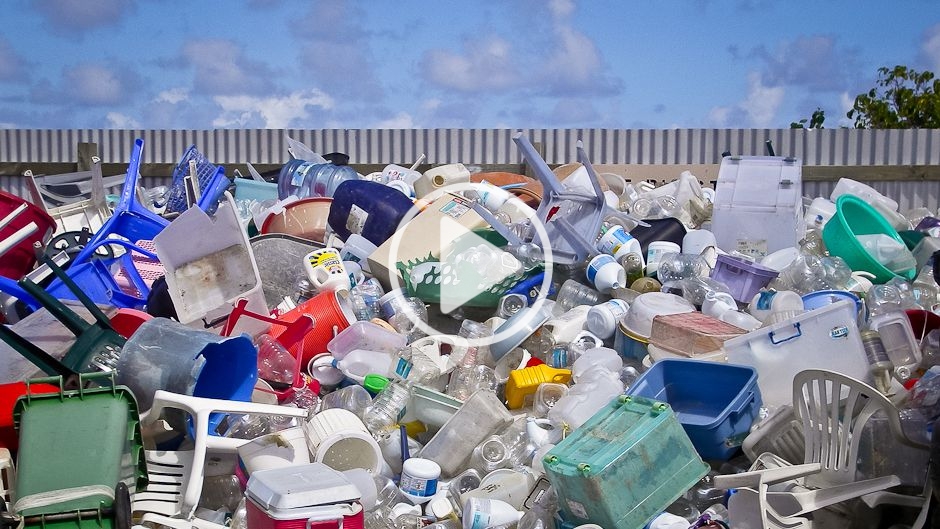 Our “Plastic to Oil Fantastic” video brief about the invention of a plastic-to-oil converting machine went viral and exceeded 3.7 million views on YouTube.

This is evidence that concern over “the plastic problem” is certainly not going away, despite encouraging bans on and decreases in the use of plastic shopping bags.

Here on Our World, on the video’s YouTube page and those of re-posters too, as well as on the hot Reddit Science link, the topic has generated much interest and debate amongst commenters.

Many think that this type of recycling is not a solution, but that instead the world should be seriously focused on the first “R” — which is reduce. We should shun single-use plastic (such as your average PET bottle or disposable container) altogether, they argue. The world’s oil resources are diminishing; does technology like this enable our denial of that fact, or is it a hopeful and constructive step in the right direction?

Others are doubtful of the conversion process and have concerns about pollution or toxic residue. But the machine actually uses highly efficient but pretty straightforward pyrolysis: the plastic is fed into the pressurized oxygen-free oven and heated to 427° C (800°F), which liquefies it. The machine then converts the liquefied plastic to gas, which condenses to form a crude oil mixture of gasoline, diesel, kerosene and heavy oil. Blest tells us that, if the proper materials are fed into the machine (i.e., polyethylene, polystyrene and polypropylene — PP, PE,  PS plastics), there is no toxic substance produced and the small amount of inert char residue that may be leftover can be disposed of with regular garbage.

They also explain that while methane, ethane, propane and butane gasses are released in the process, the machine is equipped with an off-gas filter that disintegrates these gases into water and carbon.

Lastly, commentators from around the world are anxious to know if and where they can purchase a machine. Though the company still mainly produces larger, industrial-use machines, Blest Co. will be more than happy to hear from you. Please contact them directly at info@blest.co.jp.

We are all well aware of plastic’s “rap-sheet”. It has been found guilty on many counts, including the way its production and disposal raises resource issues and lets loose extremely negative environmental impacts.

Typically made from petroleum, it is estimated that 7% of the world’s annual oil production is used to produce and manufacture plastic. That is more than the oil consumed by the entire African continent.

Plastic’s carbon footprint includes landfilling and incineration, since sadly, its recycle rate is dismally low around the globe.

Plastic trash is also polluting our oceans and washing up on beaches around the world. Tons of plastic from the US and Japan are floating in the Pacific Ocean, killing mammals and birds. Perhaps this tragedy is best captured in the TED presentation by Capt. Charles Moore of the Algalita Marine Research Foundation.

Using less, or use it better?

Thankfully, there are those who fully appreciate that plastic has a higher energy value than anything else commonly found in the waste stream. A Japanese company called Blest created a small, very safe and easy to use machine that can convert several types of plastic back into oil.

Though Japan has much improved its “effective utilization” rate over the years to 72% in 2006, that leaves 28% of plastic to be buried in landfills or burned. According to Plastic Waste Management Institute data, “effective utilization” includes not just the 20% that is actually recycled, but also 52% that is being incinerated for “energy recovery” purposes, i.e., generating heat or electric power.

“If we burn the plastic, we generate toxins and a large amount of CO2. If we convert it into oil, we save CO2 and at the same time increase people’s awareness about the value of plastic garbage,” says Akinori Ito, CEO of Blest.

Blest’s conversion technology is very safe because it uses a temperature controlling electric heater rather than flame. The machines are able to process polyethylene, polystyrene and polypropylene but not PET bottles. The result is a crude gas that can fuel things like generators or stoves and, when refined, can even be pumped into a car, a boat or motorbike. One kilogram of plastic produces almost one liter of oil. To convert that amount takes about 1 kwh of electricity, which is approximately ¥20 or 20 cents’ worth.

The company makes the machines in various sizes and has 60 in place at farms, fisheries and small factories in Japan and several abroad. 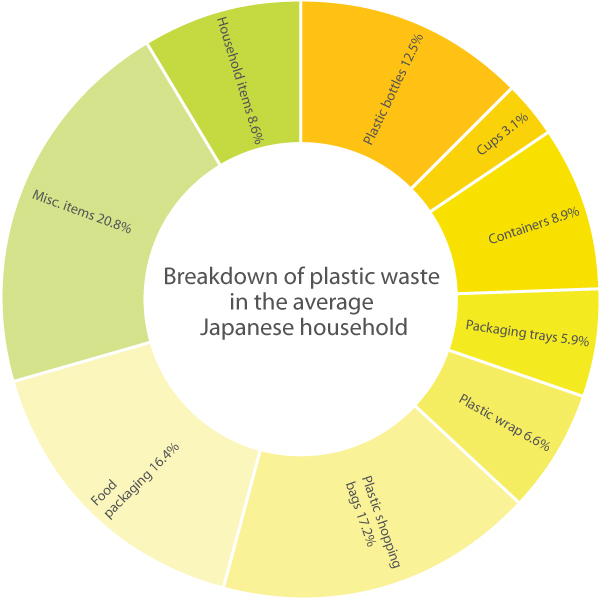 “To make a machine that anyone can use is my dream,” Ito says. “The home is the oil field of the future.”

Perhaps that statement is not as crazy as it sounds, since the makeup of Japanese household waste has been found to contain over 30% plastic, most of it from packaging.

Continually honing their technology, the company is now able to sell the machines for less than before, and Ito hopes to achieve a product “that any one can buy.”

Changing how we think

But it is the educational application of the small model of the machine that Ito is most passionate about. He’s taken it on planes on many occasions as part of a project that began some years ago in the Marshall Islands. There he worked with local government and schools to teach people about recycling culture and the value of discarded plastic, spreading the Japanese concept of mottainai, the idea that waste is sad and regrettable.

In such remote places, the machine also serves as a practical solution to the plastic problem, much of it left behind by tourists: the oil produced is used for tour buses or boats, Ito says.

Plastic’s carbon footprint includes landfilling and incineration, since sadly, its recycle rate is dismally low around the globe.

“Teaching this at schools is the most important work that I do,” Ito reflects. In Japan too, he visits schools where he shows children, teachers and parents how to convert the packaging and drinking straws leftover from lunch.

If we were to use only the world’s plastic waste rather than oil from oil fields, CO2 emissions could be slashed dramatically, he says.

“It’s a waste isn’t it?” Ito asks. “This plastic is every where in the world, and everyone throws it away.” 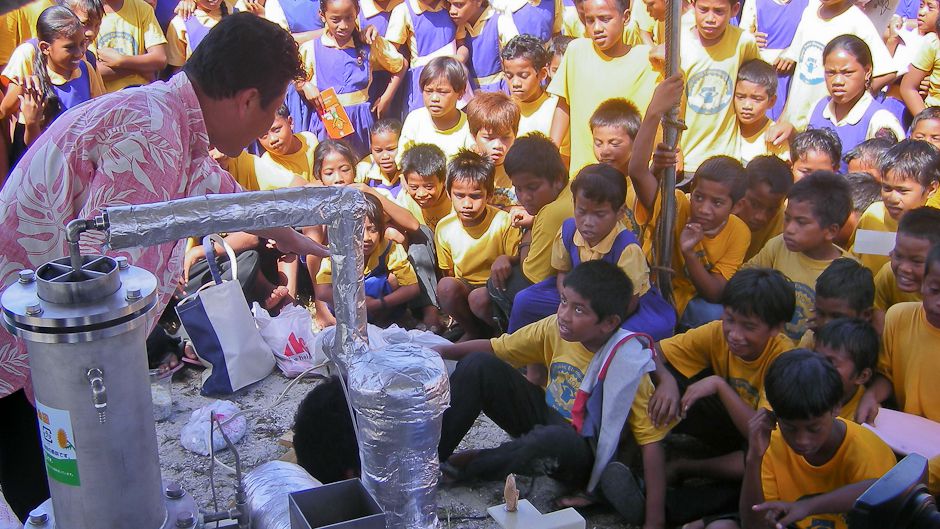 Akinori Ito demonstrates the machine to school children, teaching them about the energy embodied in the plastics we too easily throw away.

A mountain to climb down

The wonderful invention of plastics has spawned a huge problem that we are struggling to solve. With peak oil looming, things are set to change, but we find ourselves on top of an oil and plastic mountain, and the only way forward is down.

So while many solutions like this are not without hiccups or detractors, they are a step forward in coming to terms with our oil and plastics dependence and help raise awareness of the carbon footprint of its production and use. Somehow we all know that plastics is a habit we need to kick. But that doesn’t seem to make it any easier.

Perhaps the best thing you can do is to look more deeply into this issue. A good place to start is the 2008 Addicted to Plastic documentary from Cryptic Moth productions. You can watch the trailer online and maybe request it at your local video rental store.

According to the blurb, “the film details plastic’s path over the last 100 years and provides a wealth of expert interviews on practical and cutting edge solutions to recycling, toxicity and biodegradability.”

Next it is just a matter of taking action to break our love affair with plastic.

Both the Plastic to Oil Fantastic article (by Carol Smith) and the video brief at top are licensed under a Creative Commons Attribution-NonCommercial-ShareAlike 4.0 Unported License.
PLEASE NOTE: The Plastic to Oil Fantastic video brief and any excerpt taken from it must make attribution to the source (United Nations University’s Our World Magazine) and state the conditions of the license under which it was published so that others may also share it. An example of such a note follows:
This work by United Nations University’s Our World Magazine is licensed under a Creative Commons Attribution-NonCommercial-ShareAlike 4.0 International License.
(Use the Creative Commons tool to generate appropriate variations.)